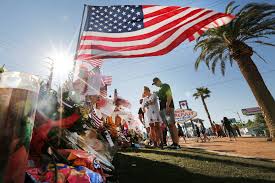 If I today were a publicity-mad attorney — is there any other kind? — I know exactly what I’d be doing: I’d file a defective product lawsuit against the manufacturer of the AR-type assault weapon used in the California synagogue shooting that left one dead and three wounded.

The grounds? It failed to wipe out more innocents.

Authorities say the shooter had intended a higher body count, but the stupid gun jammed. That’s not supposed to happen.

Someone should have to pay.

Imagine the scalding ridicule from the scores of other spree killers who’ve used the very same weapon to kill hundreds in elementary schools, churches, movie theaters and other places Americans have come to know to be common killing grounds.

I’d depose who sold him the gun. They say a good attorney never asks a question to which he doesn’t know the answer. That must make me a brilliant attorney because I can prophesy word-for-word exactly what he’s going to say.

ME: “Did you ask the shooter to reveal his sexuality before you sold him the weapon?”

ME: “Please, I’ll ask the questions. You’d do that because we live in a land where Mike Pence thinks Indiana bakers should have the right to ask about customer sexuality before they decide if they feel like baking a wedding cake for couples they suspect might be homos. I’m trying to determine your priorities.”

HIM: “I did not ask about his sexuality. We gun sellers would never dream of getting into those sorts of morality issues.”

ME: “You’re telling me. Do your weapons come with guarantees?”

ME: “Is it considered misuse or abuse to walk into a place of worship and shoot to death unarmed men and women?”

ME: “Does the warranty say, ‘Guaranteed to kill at least five unarmed worshippers — or your money back!’”

ME: “Are you familiar with the Firearm Safety 10 Commandments?”

HIM: “Certainly. It’s full of common sense wisdoms intended to keep people from getting killed.”

ME: “You mean keep from getting killed accidentally. Do you think it would be beneficial to add an 11th commandment, say, “Thou shalt not kill.” You’ve heard of it? It’s No. 5 on the original 10 Commandments. No. 5 with a bullet.”

ME: “If the gun had functioned properly how many would have been killed?”

HIM: “Depends. ‘til he either ran out of bullets, targets or until a good man with a — ”

ME: “How many innocent deaths are acceptable before the good men with guns show up? Don’t answer that. Do you think in the interest of saving lives it would be beneficial to sell more defective weapons, like maybe one-out-of-every 5?”

HIM: “That would be bad for business.”

ME: “But maybe good for worshippers. No further questions.”

I’d depose the man who made the defective gun.

HIM: “So responsible sportsmen can enjoy a great American tradition.”

ME: “I’m going to assume you don’t mean shooting up places of worship. How many deer could you kill with one of your weapons?”

ME: “What if they’re all penned up in coral or, say, inside the hallowed walls of a place of worship?”

HIM: “All of ‘em, if the weapon doesn’t malfunction. But there are laws against that sort of thing. No one in their right mind would want to see that kind of slaughter.”

ME: “No further questions. I’d now like to call Dr. Nikki Stamp.”

ME: “Oh, hello. You’re a heart and lung surgeon from Perth, Austalia?”

ME: “Are you the same Dr. Nikki Stern who wrote the story in today’s Washington Post under the headline: ‘I’ve Been a Surgeon in Australia for 16 Years. I’ve Seen Only Two Gunshot Wounds.’”

ME: Is that story accurate?”

ME: “Will you please read aloud the last paragraph?”

DNS: “I will. ‘I cannot offer a solution for the gun epidemic in the United States, but guns are clearly a public health issue. Australia’s gun laws will never be a model for Americans, that much is clear. But what may be a model is our resolve to make meaningful changes. It took one event (Port Arthur, 1996, 35 killed) to change the laws to make guns safer in this country, and I hope that Americans fully commit to make guns safer in a way that is effective and suitable for their legal system. I hope that future American surgeons will someday find gunshot wounds as unusual as I do.”

ME: “No further questions. I seek no damages. Too much damage is already daily being done.”

Thank you for indulging me in some absurdity. I thought it was appropriate because in a land where we continue to do nothing in the face of so much insane gun violence, absurdity reigns.

Because it’s looking increasingly like our options have narrowed down to dying of either multiple gunshot wounds or drowning in the bloodshed of all the innocents.

Why’d they cancel the baseball games?

Solutions to gun violence: one bullet per gun
Posted by Chris Rodell at 1:12 PM