Golfing with my handicaps 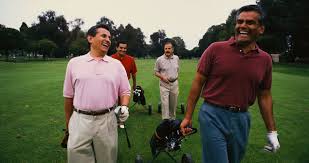 It is said with an earnest concern I find humbling, which is why I feel ashamed when I respond with jackass humor whenever someone asks me if because of my condition I’m unable to golf.

I let that sink in a moment before delivering the punchline most of you saw coming a mile away.

Thus, this is a story about a chronic muscular failure combined with a neurological regression that leads to anxiety and persistent feelings of failure.

Think I’m talking about Parkinson’s? No.

And because this about golf, I feel compelled to once again share the greatest line I’ve ever heard about golf, which isn’t really about golf at all, but is instead about sex.

And in the end it’s always about sex.

I was talking in 2007 with a new golf fanatic — he was in his mid-30s — who’d driven 38 hours from Denver to Pittsburgh to watch Tiger Woods play golf at Oakmont. He was out of his mind for golf.

“The first time I ever set foot on a golf course was 6-months ago. It was the most fun I’ve ever had at something I was so bad at since the night I lost my virginity.”

I told him I wrote for Golf Magazine and that was the greatest line I’d ever heard about golf.

He said, “You write for Golf Magazine? Man, you must be good!”

I’ve played twice this year. Had a 108 Tuesday at Ligonier C.C. and spent a good deal of time wondering why I continue to pursue something I’m so bad at with no realistic hopes of a more satisfying performance — and we’re talking about golf, not sex, although the lines are beginning to blur.

People ask if golf is so frustrating, why bother spending 4- or 5-hours doing it, a statement that is about 98 percent incorrect. Very little actual golf occurs during your typical round of golf.

Your average golfer is only golfing for about 3 minutes during a round of golf, that is 3 minutes when the golfer is standing there engaged in the process of executing an actual golf shot golf.

The rest of the time is spent drinking beer, racing golf carts, whizzing against a tree  and gamely laughing at everything your mates say the way the gang at the old Bada Bing laughed when Tony Soprano cracked a joke.

One of the requirements of being an acceptable golf partner is to lol in non-humorous situations where other people merely type lol.

Faking a good maniacal laugh, like faking a gangbuster orgasm, is tedious, but both deceptions can be essential to building relationships.

In golf, fake laughter establishes open-minded acceptance so authentic camaraderie can be achieved later on when everybody is good and drunk and everything seems funnier than when you’re sober. And that golf camaraderie is for me the best part thing about golf.

It’s why I’ve lately been quoting the line, “A great day of golf involves where you played, how you played and with whom you played — and the first two are overrated.”

So, yes, I’m still playing golf and taking great joy out of a day spent drinking beer, racing golf carts whizzing against a tree and playing about 3 minutes of golf.

The instant I can no longer enjoy a day like that, well, I’m screwed.

Told you it’d in the end be all about sex.

After 15 years, turning the page on golf calendars

NYTimes features me, my ace book