Will I become the last unemployed American? 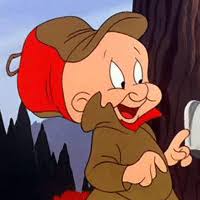 News that the unemployment rate has descended to 3.6 percent has me wondering if I’ll be the last unemployed man left in America.

The opposing statements are both equally true.

People say they drive past the Tin Lizzy and see me up here on the 3rd floor staring at the computer. They say they saw me working. A stickler for accuracy even when it’s detrimental to my reputation, I feel obliged to correct them.

“In fact,” I say, “what you likely saw was me sitting. The chances of me doing anything that would earn an actual, albeit meager, wage are next to nothing.”

It’s unfathomable how much time I devote to thinking up a line that might be thoughtful to readers like you for about, oh, three seconds. A line like, say:

Took me about 20 minutes to compose and craft that one. Then I spent another 10 minutes trying to find just the right Fudd photo to best illustrate the word play (it’s the one up top).

Then I sat staring at the computer and admired the resulting tweet for like 15 minutes and concluded, "Well, that’s the best I got this afternoon. Might as well call it a day. Time to hit the bar.”

I used to dream my life would unwind like one of the great, noble figures in literature I so admired, men like Tom Joad or Atticus Finch, respect-commanding figures of substance and drive.

I was sitting up here in the window “working” when it dawned on me that life turned out just like I’d hoped. Sorta. I have, indeed, become a character from American literature. Just one problem.

The character is Ferris Bueller!

I must make it look easier than it is.

People ask me what it’s like to be a “successful” writer. I tell them I aspire to success. Hell, I aspire to mere solvency. I respond to break even the way many of you do to getting lucky on some band kid’s strip ticket.

I’m a 56-year-old man whose idea of a really good day is one that involves me finding a quarter.

And while I do not consider myself a successful writer, I am becoming a locally  acclaimed one. People know my name. I like that. But mine isn’t the kind of name that’s ever going attract sneaker contract dough. I’d like that better.

Other writers tell me they want to be like me. They ask how I do what I do. I quote to them Bob Dylan from the song, “High Water.”

My poor wife. I suspect about once every other month or so she wishes she’d married a plumber.

Heck, it’s about once every other month or so I wish I’d married a plumber.

I think the worst part for her is when we’re out and somebody starts to gush about something I’ve written. And, God bless ‘em, some people hold nothing back in their manic praise. Goes straight to my head.

What I lack in deficient funds, I make up for in baseless ego.

I wake up every single day convinced something wonderful is going to happen to my career and I’ve been saying that every single day since June 31, 1992, the last day the U.S. Department of Labor considered me a gainfully employed individual.

There is a Fool-on-the-Hill sort of beauty in such simple-minded optimism.

The problem is that it keeps smashing up against the complex realities that go hand-in-hand with being the fool in the window on the 3rd floor of the Tin Lizzy, the one who spends so much time wondering WTF.

See, I with my whole heart and (most of my head) believe the people who tell me I’m great and that one day I’ll be truly successful in ways more tangible than flattering name recognition.

And if and when that happens, then the story of my life will become one of the  very best stories of my life.

It wasn’t  my intention, but I guess now is as good a time as any to pass the hat. Donations accepted at PayPal (Chris Rodell) or get in touch about book purchases at storyteller@chrisrodell.com.

A blog on bloggin’