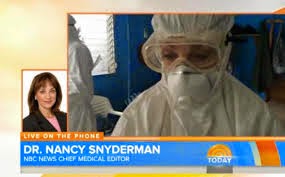 (638 words)
Did you know Ebola is named after the Ebola River in the Democratic Republic of the Congo? It’s where the first outbreak of the deadly virus happened back in 1976.

I wonder if Dr. Nancy Syderman knows that. She probably does.

She’s the NBC chief medical correspondent who after dramatic — and heavily promoed — spots for her network donned hazmat gear to battle the disease in the Liberian hot zone . The message was clear: This is very dangerous and NBC personnel are risking their lives to make sure you’re informed and safe enough to stay tuned for Matt and Savannah’s cooking segment coming up right after Al does the weather.

When one of her crew began showing symptoms (he’s recovering), NBC gravely announced Snyderman and her team were — just to be safe — undergoing a voluntary 21-day quarantine. The quarantine was due to last Oct. 22, by which time symptoms would have either emerged or not.

That’s why it was real news that Snyderman was spotted getting takeout soup from the Peasant Grill in Hopewell, N.J.

People were outraged. How dare she risk spreading a relentless epidemic? Does she think the rules she promotes on NBC don’t apply to her?

My thoughts were more culinary.

I thought, “For her to risk her career, her reputation and the potential loss of countless lives, that must be some damn good soup.”

I’m a soup aficionado and spend long hours in the kitchen this time of year making big vats of French onion, chicken noodle and a savory turkey gumbo to sustain me when the winter proves too bitter to wander outside.

See, I take my self-quarantining much more seriously than Dr. Nancy does.

She released a vague and self-serving “apology” that is only fanning the flames of disdain. She admitted “members of our group” may have violated the quarantine, but it’s okay, because “as a health professional I know that we have no symptoms and pose no risk to the public.”

The physician had healed herself.

Of course, many people want her fired and I’d be fine with that. How can we trust her next time she tells us posterior liposuction, while a less healthy option than exercise and a proper diet, are a safe and time-saving way attain a nice tight butt.

Given that we live in times of unremitting vitriol, termination from her cushy job isn’t enough for many fire breathers.

They want her to die of Ebola!

That’ll show her, they say. Yeah, I think that would do the trick.

Clearly and by her pseudo-apology she’s shown she’s incapable of metaphorically dying of embarrassment, which is the reaction traditionalists like me would prefer.

I have none of that hate in my heart. Ideally, I’d like to see her while in strict quarantine announce that she’d begun exhibiting symptoms, but they were miraculously cured by a quart of that Peasant Grill soup that’s now made its way onto my soup bucket list.

This to me is all symptomatic of how news — even news concerning the potential deaths of millions — is all just entertainment.

We’re in the midst of what experts say has the potential to surpass AIDS as the  worst public health crisis since polio and, instead of solutions, the priority is either snag ratings or assign blame.

I fear we’re heading down a long dark river banked between hucksterism and hysteria.

I believe my fears will be confirmed in 18 days when parents begin gleefully dressing their little trick or treaters in full hazmat gear for Halloween.

You’ll be able to differentiate the altruistic health care workers from the publicity hounds like Snyderman because she’ll be the one carrying a bowl of soup.

And remember, kid, be sure to pronounce it “E-bol-a soup.”

You are riht on abouyt all of it. To me the original quarantine announcement was self-serving and then the doc's reckless behavior suggests that even the King's Court can always follow his ratings and drama appetite.

To make matters worse the narrative from public health officials at all levels has been garbled, inconsistent and feckless. Careful viewers of all this can easily draw the conclusion that no one really knows what is going on.

Agreed. Matt used to look uncomfortable with the silliness. Now he looks like one of the hosts from "Hunger Games."

Check out "CBS Morning News." Charlie Rose, Norah O'Donnell are very appealng. They have a great supporting cast and it's news for at leas an hour.