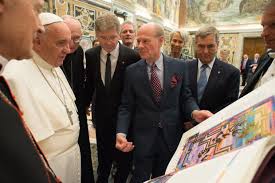 We can add another title to the ones decorating Pope Francis’s already illustrious LinkedIn profile.

Yes, the Vicar of Jesus Christ, the Bishop of Rome, the Supreme Pontiff of the Universal Church and the Successor of the Prince of the Apostles is now The World’s Biggest Re-gifter!

He was presented on Thursday an $8 million, hand-written, lavishly illustrated St. John’s Edition Apostle’s Bible, said “Thank you very much!” and promptly turned the historic heirloom over to the U.S. Library of Congress.

I guess that’s only slightly more proper than taking it to Barnes & Noble and trying to swap it for one whopper of a gift card that would, I guess, allow him to purchase his own store, biscotti shop and all.

Have you heard about this?

The Saint John’s Abbey and University in Collegeville, Minnesota, commissioned the work in the year 2000. It secured the services of Donald Jackson, the official calligrapher to the Crown Office of the United Kingdom of Great Britain and Northern Ireland.

It is the first hand-written and illuminated (illustrated) Bible commissioned by a Benedictine abbey since the invention of the printing press 500 years ago.

Jackson and his team have for 15 years gone to work each and every day and transcribed the Bible in painstaking detail.

I wonder how many times they rolled their eyes when they heard co-workers joke they’d finally fixed the office copy machine.

Thou shalt not get writer’s cramp.

I’m going to try and check it out next time I’m in D.C.

And I mean “check it out” in the library sense. I’ll show them my card and say I want to take the big Bible — it’s about the size of a party pizza — home with me.

I’ll bet they’ll let me, too. Libraries are like that. Unlike banks and loans, libraries aren’t looking for reasons to say no.

I’d take it home and leave it on the coffee table and hope they wouldn’t eventually notice all the drink rings on the cover from using it as a really fancy coaster.

Of course, there’s a chance this is one volume the library is going to hoard, which is a pity.

They’re likely going to keep it secure under glass and you won’t be able to turn the pages. If library patrons are lucky, they’ll turn one page a day, which means if you want to read the whole thing and find out how it ends you’ll have to be there every day until April 16, 2017.

The butler did it.

Of course, now I wish I rode the bus to work with master calligrapher Donald Jackson. He’s the man who can justifiably say he wrote the Bible.

So he’s up there with Moses and the prophets.

The pictures I’ve seen of him make him look like a maitre ‘d at some posh restaurant.

I’d like to know why he didn’t wear a robe and sandals. That’s more Biblical looking and I think it’d you’d care less if you got ink on the sleeves.

I’d like to know if he felt any impulse to make parts of it more lively. Long stretches of the Bible are tremendously tedious and story pacing could be accelerated if Jackson had tossed in a gratuitous chariot race or some Bedouin sex.

The Bible needs more of that if it’s ever going to really catch on.

Catch on? What am I saying?

I wonder how many of them are owned by the pope.

I read the average American home has four Bibles.

How many does the pope own? Four? A dozen? A hundred?

You could argue he “owns” every Bible in the more than 250,000 Roman Catholic Church parishes around the world.

So giving a Bible to the pope the proverbial coals to New Castle story.

Understanding this, you and I need to brainstorm up a truly unusual gift for next time the pontiff visits, something unforgettable, the kind of thing he’ll forever remember for its charming uniqueness.