Hooray! It's Tweets of the Month time! 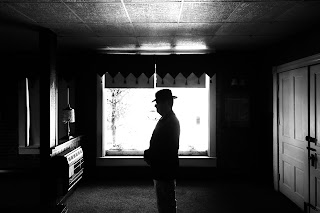 And I’ll bet that smug, snarky remark is gonna cost me another dozen followers by the end of the day …

(Artsy vaguely Hitchcockian Brian Henry picture was taken in the Tin Lizzy dining room in 2015 just prior to when Rick and Lisa took over the kitchen. Great food! Check it out.)


• It's good to know your limits in life. It's better to high-five them as you sail right on past.

• Yes, I'm aware that Sing Sing is a maximum security prison that incarcerates many of New York's most vicious cut throats, but every time I hear Sing Sing I convince myself that Sing Sing is populated entirely by wrongly convicted Muppets.

• How did cavemen and women get around that whole no-doors thingie when they wanted to tell a good prehistoric knock-knock joke?

• My jokes must not be very funny. I told one to some linked steel and didn't get any chain reaction.

• Problem: plastics clogging the ocean; fish eat the plastics and we eat the fish. This may sound naive, but is anyone looking into the possibilities of making plastic out of fish food?

• The concept may sound difficult to grasp, but there once was a time before anyone, anywhere had ever pointed out there's a first time for everything.

• Spring is when Mother Nature puts on her make-up!

• Closing in on another Friday Happy Hour where I'll revel in another week where I -- one -- did not let national politics make me crazy and -- two -- skillfully avoided dropping my phone in the toilet. Alas, those are now my key benchmarks for success.

• The problem for many of us is that every time our careers seem to turn a real corner the first thing we see down the road is another real corner.

• It doesn’t happen often, but I’m not ungrateful when a man or woman hands me a breath mint. My fear is how I’ll react when one day some stranger trying to be helpful says, "Psst, try this.” And hands me a stick of Old Spice.

• What do they call earthquakes on other planets?

• I yearn to live in a time when the word "collusion" appears in headlines less frequently than the word “compromise."

• Little known fact: Prior to construction of the 859-year-old Notre Dame Cathedral, the Parisian location was the site of the first French McDonald’s.

• The phrase “You only live once!” is pure fraud. In fact, you only die once. You’re graced with the option to live every single day.

• I consider it yet another degradation of once-proud men, but I'm upset how what I once called "the family jewels" somehow became "my junk." From jewels to junk in three short decades. SAD!

• It’s a triumph of Biblical marketing that the day known for the cruel beating and bloody crucifixion of the holy man many of us consider to be our Savior is called "Good" Friday. I wonder what Jesus calls it.

• My favorite part of the #NFLDraft is watching Roger Goodell excessively celebrate with players who he'll in just five months begin to fine for excessive celebrations.

• The assumption may be based on a flawed premise, but I have to believe if Moses had had to deal with fan selfie demands today we'd only be concerned with The Five Commandments.

• Agoraphobia is the fear of crowded places. I suffer from a-bore-aphobia, a fear of places crowded with dull people.

• Call me crazy, but the first chef to put a credible "Italian Hoagie Soup" on the menu is going to make a fortune.

• A Christian in New Zealand kills 50 because he hates Muslims; Muslims in Sri Lanka kill 250 because they hate Christians; zealots in Pittsburgh and San Diego storm synagogues 'cause they hate Jews. Oh, how I wish there was just one God we could ALL worship all together.

Tweets of the Month, April ’16