Seeing Satan in the smoke & the story of Daryl, the forgotten 13th Apostle 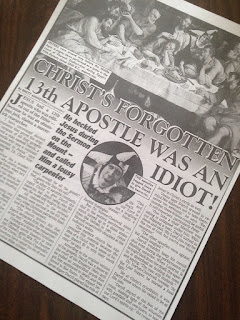 The tragic incineration of Notre Dame Cathedral had the faithful around the world peering through the smoke to see the faces of hope and redemption.

It’s a habit I picked up through years of reading the Weekly World News.

You can have “The Onion,” “Mad,” and other hipper sources of satire. To me, the funniest periodical ever printed was ‘the WWN.

They never skimped on the exclamation points. Never!!!

The News was the paper that provided some of the most comprehensive coverage of the life and death of Elvis Presley — in 2006. He was 71.

I started reading the WWN in college, never dreaming my “career” would lead to friendships with swashbuckling staffers. The Weekly World News was until it closed in 2007 a sister publication of National Enquirer. Their offices were separated by a simple partition.

So when I finished doing my wacky Enquirer stories during my visits, I’d stroll around the partition to revel in the preposterous. It was a storyteller’s paradise.

But it wasn’t all fun and games. When global tragedy struck, they were like other more sober news organizations in that they were ready to detail what happened and assign blame.

Unlike those prissy brethren they held nothing back when it found blame. And their quoted experts usually laid the blame at the hooved feet of …

Yes, any calamity inevitably led to a front page picture of smoking ruins with a sinister headline: “Face of Satan Seen in Smoke …”

That’s how I learned about the existence of Daryl the 13th Apostle. I recently found a copy of the story in box of old keepers. Headline: “Christ’s Forgotten 13th Apostle Was an Idiot!”

The story says a maverick researcher learned that the Apostle named Daryl was an “obnoxious jerk” and a constant embarrassment to the Savior. Church fathers believed dopey Daryl detracted from the solemnity of the Bible and edited him out of the Gospels.

British historian Dr. Chad Norton-Chestwell is quoted as saying, “Daryl was rather like a drunken party guest who clowns around thinking he’s funny when he’s really just annoying.”

He said Daryl showed up drunk at the Sermon on the Mount and actually heckled Jesus, shouting things like “Borr-ing!”

He demolished the dignity of the occasion of Jesus’s triumphant entry into Jerusalem by mooning the crowd and telling Jesus, “How’s that for turning the other cheek?” Jesus had to stop His followers from beating Daryl senseless.

The story about how Jesus turned water into wine when the wedding party ran out? Take a wild guess why they ran out.

He couldn’t even keep his yap shut during Jesus’s miracles. When He brought back Lazarus from the dead Daryl pinched his nose and declared, “The man still stinketh.”

No realm was too sacred for Daryl to satirize. One time a chair Matthew was sitting in collapsed and Daryl said, “My Lord, you may be the Son of God, but you’re one lousy carpenter.”

“At the Last Supper, he started a food fight. The other 12 apostles constantly urged Christ to give Daryl the heave-ho, but Jesus being who He was, he could only forgive the idiot.”

Yet, at the crucifixion, it was Daryl alone whom He called to be at His side, Norton-Chestwell said, adding, “Daryl stayed at the foot of the cross, making light of the situation with pratfalls and one-liners, to keep the Lord’s spirits up.”

Now, I suspect some — just some — of the WWN’s stories were made up (“Baby Born with Wooden Leg!”).

But I hope the story of Daryl the Forgotten Apostle is factual.

I like the idea of a Savior with whom you could sit and enjoy Leslie Nielsen in “Airplane!” and “Naked Gun” movies.

Because some probably did see the face of Satan in the smoke above Notre Dame.

But if you look closely enough, you just might see the Face of God every time you see someone you love smiling back at you.

Weekly World News & the baby born without a nose

What’s the big idea? Read this

Hilarious!!! *note the excessive use of exclamation points
Really, this is a good one Chris. And I love the final line.

Just saw this. Thank you! I hope you'll keep reading and LOL.