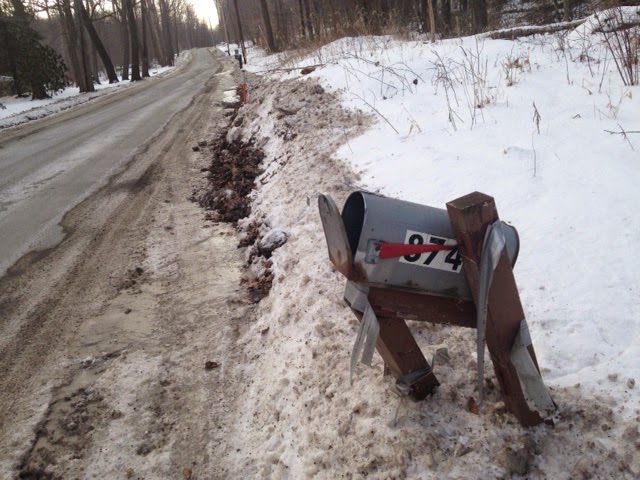 I like to think there was at least some sport involved, like maybe the roadmasters who drive the snow plows had a bounty on our decrepit old mailbox.

“Good news! I just blasted the Rodell mail box clear to smithereens! What’s the pool up to?”

Even before the destruction, ours was probably the ugliest mailbox on our two-mile stretch of rural road and I, of course, didn’t give a crap. It was dented, rusted, held together with duct tape and leaned so badly it looked like it would tip over when the mail’d back up more than a day or two.

It’s not even on our property. It’s across the street from our home, which at times resembles the battered old mailbox only with doors, windows, and way more duct tape.

So for a snow plow driver to clip it must have felt to a township employee like an act of civic beautification.

Driving a snow plow can’t be easy. The unpredictable hours are long and it’s your job to be out on the worst nights resenting the rest of us as we sit inside sipping hot cocoa.

It’d certainly break the tedium to see how close you could come to the rows of mailboxes without demolishing them.

I briefly suspected the mail lady was the culprit before realizing she, like me, probably just doesn’t give a crap.

To her it’s just another mailbox. In fact, mailboxes to her are probably like johns to prostitutes.

She doesn’t really care how they look as long as she doesn’t have to kiss them.

My wife wondered whether the township would pay for the damage.

She said that and I tried to imagine the roars of laughter that would result from me showing up at the the township office with a cardboard box of postal roadkill.

I’d been meaning to get a new one, but instead just kept slapping on more duct tape to delay its inevitable disintegration. And I can’t stress this enough: I really just didn’t give a crap.

Mail delivery has been steadily cheapened over the years. No one sends letters, no one sends postcards. Heck, the soulless internet’s usurped delivery of most of our bills and paychecks, too.

It wasn’t that long ago I used to race to get the daily mail. I used to get lots of interesting newspapers, magazines and actual paychecks.

Ah, the heady swoon of nostalgia!

Now, probably the only thing more boring than retrieving the mail is having to deliver it. Seven-eighths of it go straight into the recycling bin.

I did for a moment wonder if more sinister elements were in play. I wondered if the snow plow drivers despise me.

They may hate me because they mistakenly think I’m give them the finger every time they pass and I’m out there shoveling.

It’s a simple miscommunication that may have spiraled out of control.

See, I do appreciate the job they do. And I always make sure I’d stop my shoveling and give them a big friendly wave as they’d pass.

Then something changed that may have confused them.

I bought a pair of mittens.

So what in a gloved hand looked like a friendly full-fingered wave could now in the flying snow be misconstrued as an angry taxpayer flipping the bird.

Maybe word got around that the friendly guy up on Solomon Temple Road has gone snow crazy and they conspired to screw with me. Because we all know it’s more fun to antagonize a mentally unstable person than actually reach out and help him.

Val took the sad remains of the mail box and propped it back up so at least the mail lady still delivers the mail, but it’s uprightness is precarious.

It’d be a house of cards if people only still sent cards.

It’d be great if mail suddenly became interesting again. But I don’t see that happening. It’s all junk and junk’s what it’ll likely always be.

And the more crap I get in the mail, the less likely I am to ever give a crap about ever getting the mail.

Whining over postal liquor restrictions
Posted by Chris Rodell at 11:42 AM