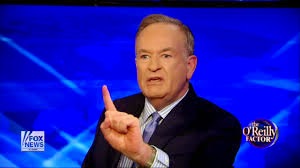 It’d be the intellectual equivalent of watching an old professional wrestling match between Hulk Hogan and Sgt. Slaughter. There’d be eye-gouging, ear-biting, shouted threats and the mutual kind of menace that would make an old Mike Tyson fight seem comparatively dainty.

Of course, I’d have to watch with the volume way down. To hear Bill O’Reilly shouting at Bill O’Reilly about the many exaggerations in Bill O’Reilly’s story would make my head pound.

Just like it does on those rare occasions when I tune in to watch Fox News.

The mouthpieces don’t so much report the news as berate it. They leer. They roll their eyes. They shake their fists.

That kind of behavior while delivering what purports to be news is highly entertaining to a lot of people who enjoy losing the popular vote in five of the last six presidential elections.

To me, he’ll always be the buffoon from the tabloid TV show “Inside Edition,” which he anchored from 1989-94. Having trolled in the tabloid world for 10 years myself, I don’t begrudge him the shifty persona one bit.

But I do blame his audience, those us-against-the-world, Koch-brother-loving, Obama-delegitimizing, climate-change-denying, flat-earther-birthers who hoot in nasty glee when Brian Williams is swiftly deposed for silly exaggerations then circle the proverbial wagons when one their own is clearly guilty of the same misdeeds.

It’s a stupid mistake and for a man in his position an unforgivable one. He should go.

He claims he was under fire in a war zone — even as he acknowledges that “war zone” was 1,000 miles away.

Even if you concede him his dubious semantics, no one who was in actual combat in the Falkland Islands at the time is bragging he took a shot that nearly hit future Fox News deity Bill O’Reilly right in the ass.

It’d be like me saying I had an intimate chat with Mick Jagger in 1994 because I heard his amplified yell to me and 49,999 other Stones fans, “How ya doin’, Pittsburgh!’ and I politely responded, “Doing great, Mick. You?”

I’ve been avoiding this topic because it’s such a petty little lie, to me the journalistic equivalent of O’Reilly telling a girl in a bar he’s got a really big penis. It’s tasteless, it’s crass, but depending on the woman’s immediate options and appetites, the veracity of the boast will one way or another be exposed.

To me, this is a much bigger story and will remain one because of the way he and Fox are over-reacting to it.

They’ve threatened reporters, shouted hair-splitting details and have done everything in their power to slime the reputations of anyone who responds to the gotcha with a hearty Muntz.

So I’m going to enjoy watching as now-provoked legions of reporters dig into every detail of this flawed pretender’s audacious claims and ferret out more falsehoods that chip away at his standing and that of his employer.

And the more Bill O’Reilly denies it, the more he’s exposing himself for what he really is.

Not just the kind of man who brags he has a really big penis.

More the kind of man who is nothing but one.

Caesar Flickerman not real so NBC’ll stick with Brian Williams

What happened when I spent 72 hours handcuffed to my wife