"Us" movie & the perils of genius 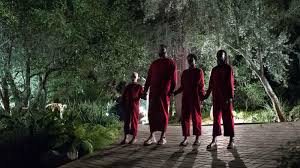 Val and I walked entertained, but bewildered from the movie theater. We’d just seen the highly regarded new Jordan Peele horror flick, “Us.”

The movie is a huge critical and commercial success with 94 percent of Rotten Tomato critics declaring it a solid winner.

Val said she was eager to get on her computer to read informed explanations about what the hell happened in the movie we just watched.

I was eager to get back to the bar and warn fans of coherent movies with logical conclusions to avoid “Us.”

Now is the time when considerate writers stop to warn: “Spoiler alert!” We do this so we don’t ruin what happens in the movie for those who want to see it without taint. They don’t want us to say what happened.

Spoiler alert! I have no idea.

It was artfully done and I was entertained, but I’m becoming increasingly irritated by what I consider lazy storytelling like I saw in “Us.”

A truly great movie ought to have an ending that puts a bow on a compelling story.

For example, I knew at the end of “The Big Lebowski” and “Smokey and The Bandit” that bowling would remain an essential part of The Dude’s life and that The Bandit’s next mechanized mayhem would involve a trip to Boston for some tasty clam chowder.

But my point persists. I didn’t need scholarly explanation and both films were highly satisfying.

A better example is another well-regarded thriller by another director regarded as a cinematic genius.

I could go into murky plot details but it would waste your time. And, really, I need just four words to to secure your attention.

That’s it. That’s the whole plot. Most of you know I’m talking about “The Sixth Sense,” the 1999 best picture nominee by M. Night Shyamalan.

It’s a near-perfect thriller that succeeds in ways Peele’s “Us” does not.

First and foremost, it has a terrific plot that makes perfect contextual sense. It’s complex without being incomprehensible. It makes more sense after subsequent viewings. I suspect “Us” won’t hold up at all. When “Sixth Sense” is over, you feel more intelligent, not less.

Spoiler alert! It does not. The M. stands for Manoj, which to me is too bad ‘cause I think MidNight Shyamalan sounds way cooler.

I suspect Peel’s next movie will be even more incomprehensible than “Us.”

Blame the perils of normal men or women being declared geniuses when they’re actually just about above average. Tell someone that he or she is a genius and colleagues and critics become apprehensive about challenging the genius’ views.

That makes you an idiot.

Pretty soon, the careless genius is unable to even act with crucial self-doubt. That, I suspect, is why “Us” is so flawed. Here come the “Us” spoilers:

Because no one said, “Jordan, babe, why didn’t the girl just run away? Yeah, the spider kid adds creepiness to the film, but it’s just a senseless distraction. And the whole Hands Across America thread is utterly preposterous.

“Now, I’m no genius, but a nice tidy ending would be having these tethered whatevers climb into a black Trans Am and race up I-95 North on a quest for clam chowder.”

I suspect Peele is in for a scalding backlash and his career will follow the same rocky trajectory as Shyamalan’s has. It took him 15 years and a string of stinkers to resume his success.

You may wonder if I fear being on the wrong side of so much critical acclaim, that I fear my projections will lead many to dismiss me as a rube, a buffoon, a cultural boob ignorant of Hollywood's future as well as its past.

Frankly, my dear, I don’t give a damn.

Thank you! I hope you'll continue to read and share with friends whenever worthy.