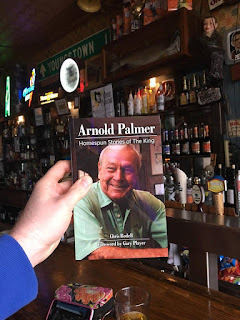 Go ahead. I’ll let you start with the jokes at my expense. Jokes like:

“What, are you going to start the tour by announcing, ‘This is the bar stool I daily drink upon for three hours. I invite you to sit here and watch me until 6 o’clock when I go to the second floor bar where I sit and drink for another three hours!”

No, sorry, it won’t be a tour of the heirloom Latrobe taverns I’ve spent a good portion of my happy life getting pointlessly soused.

In fact, the origins of the idea are as wholesome as a “Waltons” marathon on the Hallmark Channel.

One of my oldest friends is planning a father-son golf outing and when he was asked to do something memorable he thought of me.

“I’m aiming for a round at Latrobe C.C. with you acting as tour guide and then afterwards sitting around the campfire with you regaling us with your stories,” he said. “There would be about 20 of us.”

It was like I was that famous reindeer and he was Santa saying, “Rudolph, with your nose so bright …”

Who says no to Santa?

In fact, I’d been trying in vain to think of a way to capitalize on the interest in my Palmer book — in all my books — and the people who travel from all over to immerse themselves in Palmer heritage you can only find in Latrobe.

And when my friend said — tour guide — a light went off.

Hence, the crass headline above this post. I want anyone who searches for things to do in Latrobe to come right here.

Hiya! Thanks for stopping by!

But I already have a built-in constituency from the book, the one Super Bowl broadcaster Jim Nantz, ahem, says is “the best book anyone’s written about Palmer.”

I’ve been delighted over the past year to have so many readers turn into actual friends when they visit Latrobe and want to include stopping at the ballyhooed Tin Lizzy as part of their trip. They invariably get in touch and I show them around while telling my stories.

And it’s been wholly organic. I find that cool.

Just this week I agreed to provide 150 signed “Palmer: Homespun” books and tell stories at the Doug Wood Golf Classic benefitting Seton Hill College. I’m in touch with area golf courses about doing the same for their outings.

And reaction to my talks continue to be effusive. I spoke to 40 residents this week at a North Huntington senior-living community center. It went so well they demanded an encore. Not that day. They want me back in two weeks to do the whole speech over again!

Some might wonder if the demographics of the age bracket might mean the booking is a result of simple forgetfulness. What’ll I do if that turns out to be the case?

Show up and sell books every other Wednesday until someone catches on!

I couldn’t be more pleased with the reaction to the book, but thought by Christmas it would have run its course. Now I realize it may enjoy perennial interest.

So please get in touch if any of this sounds appealing. I can provide signed gift books and cheer for your area golf outing, or simply meet for post-round Tin Lizzy beers with you and your buddies.

That’s basically what I’ve been doing since the book came out so I’m happy to sort of formalize something that’ll always be defiantly informal. It’s something I envision as an small adjunct to my primary writing, a sort of cottage industry, albeit one where all the cottages serve hootch.

Either way, it promises to be another fun summer here in Latrobe. I invite you to be a part of it.

I’ll be happy to help bring it to life.

It would be a delightful irony if something that’s long been disparaged as contributing to my financial and reputational ruin — sitting in a bar drinking — could boomerang and become a boon to both.

Note: As if to prove a point, as I was putting the finishing touches on this the phone cha-cha-cha-ed. It was my friend Scott Levin at the Youngstown Grille. In between running a great local diner, he’s sold nearly 100 of my books to his hungry customers. “Hey, bud,” he said, “there’s a guy from Virginia who wants to buy two books and I’m almost out. Can you bring up some more right now?” I could. Jeff used to live here and caddied at Latrobe Country Club. He said he couldn’t wait to read the book and was really happy to meet me. “Any chance,” Jeff asked, “we could meet for a beer later? Ever go to the Tin Lizzy?”

Related … (Does anybody read these?)

I’m thinking of getting plastic surgery to resemble Arnold Palmer

Boston big shot tells me about his plants