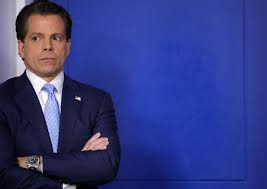 Anthony Scaramucci surprised me on Tuesday by becoming my 1,673 follower at 8Days@Amish. He becomes my second most prominent follower, a distant second to the fabulous Holland Taylor.

I brag about Taylor. I’m one of only 444 people the beloved actress follows. So Taylor is discriminating, as well as tasteful. I’ve always enjoyed her acting, her persona, her friendships with folks like Tom Hanks and her romantic companionship with equally exquisite Sarah Paulson.

But, really, who cares? I’m starting to think Twitter jumped the social media shark when the character count went from 140 to 280.

Here are my best from December …

• Historian David Halberstam was writing about the fall of Gen. Douglas MacArthur when he cited Euripides who in 480 BC said, "Those whom the gods destroy they first make mad." Can anyone help me find a current prospect? Anyone? #Trump

• I’m on the verge of proving my two office plants are talking to one another. But every time I get close enough to record the conversation the bully ficus says, "Shut up! Here he comes again!"

• Because our most reliable conversation starters -- state of weather/health -- will be moot, I imagine heaven will be full of awkward silence. Our health in heaven will be perfect and the weather heavenly so what ice breakers will be left?

• NASA planet-hunters say earth-like sphere may have all the critical elements necessary to sustain human life. To me that means Subway.

• How would secular and sacred pop culture differ had Jesus been born April 1?

• Trump’s embarrassing slurred speech today has me feeling relieved we live in a nation where no one would stoop to mocking someone for any physical behaviors beyond their control. #trumpslurring (picture with Trump mocking disabled reporter)

• My concern is if Jesus were born today rampant light pollution would make locating the star of Bethlehem impossible. And don't get me started on the odds of finding on this Earth one, let alone 3, wise men.

• The city of Nice on the French Riviera is renown as one of the most lovely places on Earth. They may dismiss it as too obviously lowbrow, but I'm going to propose a promotional advertising campaign based on the slogan, "Nice is Nice!”

• It is absolutely mind-boggling that in today's blood-drenched, weaponized America that anyone bent on mass murder is so incompetent he cannot even kill himself. #NewYorkCity #bombing

• This is the time of year to remind friends the perfect stocking stuffers will always be feet.

• Q: What does it mean when you hear, "Hoot! Hoot!" coming from a nearby tree this time of year?
A: Owl be home for Christmas.

• I wonder how many takes it took for Madonna to nail her version of "Santa Baby" or does she just make appalling look easy.

• All America will benefit when we all realize, yes, we have the 1st Amendment and the Right to Free Speech, but we also each have the Miranda, the Right to Remain SILENT. So how about today everyone just shut the hell up!

• ”Oh, there's no place like phone for the holidays!”

• I’m aware of the inherent contradictions of wanting to become rich and famous by preaching on how corrosive wanton greed has become to our national soul.

• We’ve reached a point in our national political discourse where it’s impossible to argue with people with whom you disagree and you risk infuriating those with whom you do, in fact, agree if you’re not agreeing loudly enough.

• His actions/tweets lead me to believe Donald Trump dreams he will one day be able to face Barack Obama in an actual presidential election. It's maybe the one aspiration Trump and I share.

• John Lennon sang "War is Over" in 1972. Since then thousands of American servicemen and women have been killed in 26 overseas conflicts in every corner of the globe. Imagine.