Pittsburgh for the holidays: Why go anywhere else? 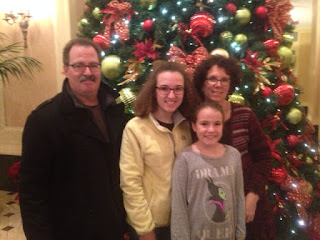 The AAA declared Thanksgiving the busiest travel weekend since 2007 with the bulk of tourists heading to Las Vegas.

I heard that and thought, man, the only explanation I can figure is the holiday flights to Pittsburgh were all booked up.

I’m one of those Pittsburghers who can’t understand why anyone anywhere would ever want to go any place else. We’re scattered all over the world.

We reside elsewhere, but we live — truly live — right in Pittsburgh. It’s where we reflexively go for fun.

We’ve always made a big deal of enjoying part of the holidays in the city, just an hour west of our Latrobe home.

We have our traditions. We enjoy visiting the Carnegie Museum of Art’s Hall of Architecture and its themed Christmas trees, the Nationality Rooms at the University of Pittsburgh’s Cathedral of Learning and ice skating around the Christmas tree at the jewel-like rink at PPG Square.

This year we decided to make it all an even bigger deal.

We seized a gracious opportunity to spend two nights at the Omni William Penn, the Mellon Square landmark that is this year is celebrating 100th year.

I’d never stayed there, but Mick Jagger has.

I without fail include mention of the grand hotel every time I’m tasked with doing a why-Pittsburgh-is-great travel feature. Happens about once a year.

Like many iconic hotels, the William Penn has a plush presidential suite. But unlike many of those, this one includes actual presidential history. Ten Commanders-in-Chief from Teddy Roosevelt to Barack Obama have stayed there, as have Michael Jackson and the Dalai Lama, who happened to stay in the same suite the very night after Jagger checked out.

It’d be a neat historical trinket to learn the staff reported either Sir Mick or His Holiness was suspected of stealing towels and that each tried to blame it on the other.

I had a great time just sitting in the lobby trying to discern any slight differences in the three lobby chandeliers.

I’d read each of the 500-pound fixtures glitters with precisely 1,754 individual crystal prisms identical to the others. The count may be accurate. I’ll never know. I kept getting distracted by the glittering ice cubes in my glass of bourbon and losing count.

There were five of those.

The beauty of staying right in Pittsburgh is having all of Pittsburgh right there.

We enjoyed the 2016 WPXI Holiday Parade, visited the PPG Place Wintergarden and its annual Gingerbread House extravaganza, cruised around the fountain at the point, and enjoyed the free holiday film shorts presentation at the Harris Theater on Liberty Ave.

Our dining and drinking options included The Carlton, NOLA, The Original Oyster House, and the famous eggs benedict in The Terrace Room at the William Penn.

I can’t write about Pittsburgh as a tourist destination without recollecting an indelible anecdote from 2009 when the Penguins won their third Stanley Cup.

I was having lunch in a Latrobe bar when the news began showing clips of all the happy South Side mayhem instigated by the victory. Fans were going nuts outside Jack’s saloon on Carson St..

My wistful buddy said, “You know, just one time I’d like to go down there and see what that’s like. It looks like so much fun.”

He’d lived in Latrobe for 50 years and a genuine Pittsburgh whoop-it-up was still on his bucket list.

I set down my fork, wiped my mouth with my napkin and said, “Let’s go. We can zoom in, have some giggles and be back by dinner.”

He declined my dare, but a week later we had a designated driver and a van full of rowdies and enjoyed a day-long frolic.

I’m dumbfounded by anyone who doesn’t in these tenuous times do all they can to add more Christmas zing to their lives. Our weekend included a few atypical upgrades, but most of it was still fun for free.

And it was all marvelous.

Vegas for the holidays?

Why gamble when there’s a sure thing right down the street?