Election leftovers and other random thoughts 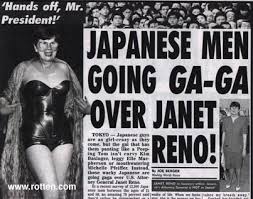 • When I read that Janet Reno, our first female attorney general, died Sunday at 78, I thought, man, I hope she was an early Clinton voter. I wonder, if you’ve voted already and subsequently croak, does your vote still count? If I had time, I’d look into it. I do not. In fact, the election is tomorrow and I have about five or six related stories I won’t be getting to. I thought that was as good a reason as any to dash off a scattergun random post today.

• A question I’m hearing from several wise friends is: Why would you even want your candidate to win? Why, indeed. No matter who wins, bad things are going to happen and this will be one of the great I-told-you-so elections of all-time. As “Art of War” author Sun Tzu points out, it’s much easier to attack than defend.

• Having said that, I like to point out if you know more Sun Tzu quotes than you do quotes by Fred Rogers you’re probably an asshole.

• I tweeted this last week and am chagrined I didn’t have time to write a whole blog post based on it: “I'm a traditionalist and never thought I'd enjoy early voting. Wrong! It was my most satisfying vote ever. I wrote in the Rodell/Rodell ticket for the 2048 election. And the girls are ahead!” Tweet was illustrated with a picture of my darling daughters, ages 16 and 10.

• Pollsters are still pondering over the idea that there are Trump supporters too “shy” to be detected. In my experience, shy is one thing our nation’s Trump supporters most definitely are not. We’ll find out late tomorrow if they’re a majority, but they’re certainly not a silent one.

• Our local Trump tourist attraction — the red, white and blue Trump House decorated with a 15-foot one-dimensional Trump — had a huge rally Friday that altered the Tin Lizzy political demographics for my happy hour. I became momentary buddies with a great guy, a die-hard, pistol-packing, Hillary-hating Trumpster. We had a great time. He showed me his Glock. I showed him a trick I do with my fingers that makes it look like I’m removing a digit. We spent about two hours BSing. We agreed on nothing, but still departed as friends. I wish the rest of America could get along as well as me and Jeff did. Maybe America needs to drink more.
• For balance, here’s a Fred Rogers quote: “Play is often talked about as if it were a relief from serious learning. But for children play is serious learning. Play is really the work of childhood.”

• It’s taken nearly 15 years, but I’m finally ashamed to have been associated with National Enquirer. When I worked there, The Enquirer was utterly pure in its pursuit of sleaze. It produced stellar scoopson  John Edwards, Rush Limbaugh, Bob Dole, Bill Clinton to name just a few. Now, one of the most scandal-rich candidates in history is getting a free pass from the Enquirer owner/Trump pal David Pecker, spawning a popular hashtag: #TrumpLovesPecker.

• The Enquirer’s ethical collapse means there’s only one real newspaper left. That’s the Weekly World News (sample headline: “Baby Born With Wooden Leg!” Above is the WWN’s 1996 “expose” of what the late Janet Reno looks like beneath her business duds (it drove Japanese businessmen mad with lust). The News, by the way, revealed just this week that an influential illegal alien is defying conventional wisdom and is endorsing Trump. Understand, this alien isn’t from Mexico. He’s from Kepler-22b, about 600 light years from Earth!

• I’m surprised we haven’t heard “Build that Wall!” chants from our Northern neighbors. With so many Americans threatening to move to Canada after the election, you’d think they’d demand some security.

• Sold 14 copies of “Last Baby Boomer” at my Saturday book signing at Greensburg Barnes & Noble! I am thrilled to hear so many people enjoying the book and hope you’ll consider getting in touch about gift copies for reader friends.

• I’m still feeling good about the Cubs victory, even though I was rooting for Cleveland. Maybe the reason is because the win meant all America is getting to bask in the joy that is seeing Bill Murray so happy in public. He was great on SNL. Coincidentally, we just that day had watched him in “St. Vincent” (2014). It’s fantastic and might be his greatest role.

• I hope you’ll check out the blog tomorrow when I intend to re-post my ’12 satire about the pretend 10 hours I spent in the voting booth as America’s last truly undecided voter.

• Be sure to vote tomorrow!

• Be sure, also, to smoke some weed, have some sex, enjoy a cocktail, splurge on a nice meal and do something to calm the hell down. I’ve never seen Americans acting more obnoxiously to one another — and I lived through the ’70’s! It’s better to live a life consumed by sloth and gluttony than hatred..

• Me, I’m going to try and do all five. All at once. It might not productive, but it’ll make Chris feel great again!