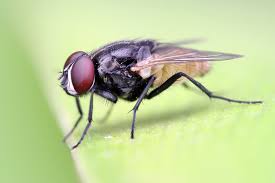 I’m so proud of that nifty line I vow to use it any time I write about flies, which means I’ll use it about twice every 1,711 times I post.

Yes, this is only the second post I’ve ever devoted to the common housefly or Musca domestica in Roadrunner speak.

I don’t know why they’re known as houseflies. The definition seems too narrow for something so ubiquitous. In the summer, they’re everywhere. It begs the question of what cavemen called houseflies.

A single female can lay as many as 500 eggs. Makes Michelle Duggar look like a piker.

Scientists estimate there are 300,000 species of flies in the world.

Make that 300,001 if you count the species to which I’ve belonged since, oh, about the 5th grade.

I’d like to have been a fly on the wall when the barflies were talking about the houseflies. My ears would have been burning.

Last month we had one of those weeks where the flies seemed like they were everywhere.

They’re so damned obnoxious — and I mean the houseflies, not my drinking buddies.

The housefly talk was upsetting to me because I heard I was being blamed for their abundance.

Some were saying the rare seasonal increase was because I kept my window open up here in the office, a survival necessity when the temperatures climb and this shabby little place begins to bake.

A fellow barfly told me.

“People are saying it’s all your fault. They’re saying the flies come in through your office window because you don’t have a screen in,” he said.

It made sense to me. I’m way up on the 3rd floor. For a fly to get in here it would likely to have had flown straight up three stories to my tiny open window. Seems like a lot of work.

What’s the incentive? It’s not like I’m grilling cheeseburgers up here.

It’d like me standing at the base of El Capitan in Yosemite and telling all the nearby picnickers, “Hey! I have an idea!”

Then the flies would have to all come through the window — and here’s where it gets like Tom Cruise in the “Mission Impossible” movies — zoom past my desk without me noticing, careen down three flights of stairs, down a hallway, through an always-closed glass door, around a bend and finally into the sudsy sanctuary of the bar to bedevil.

It would be the most adrenalized burst of industrious behavior since at least before I began blogging here.

Me, I enjoy having a certain number of flies around. Brings out the soldier of fortune in me. Feels like combat, like the 1983 kind when USA whomped on Granada

I get the same feeling swatting a fly with a rolled up newspaper as I do crushing a long drive down the middle of the fairway.

Alas, fly season is coming to an end. The frosts will soon be upon us and the flies will dissipate for another year.

I won’t miss them one bit.

What’s surprising for something so uncommonly annoying is how fleeting life for the common fly can be.

A typical housefly’s lifespan is a mere 14 to 28 days.