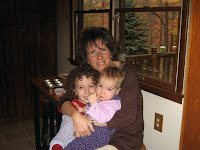 I haven’t done a Twitter dump since October 28. But today’s perfect because it’s Val’s birthday: All together now, “HAPPY BIRTHDAY, VALERIE!”

So today it makes perfect sense to take some of my favorites from 60 or so tweets I’ve posted at 8days2amish and start celebrating.

Try and guess my favorite. Answer at the end:

• Not even 8 am and I've already said hey to three friends at the gas station. Looks like I'll be enjoying a real heyday!

• My autobiography should be called "Guy Walks Into A Bar . . . (and never leaves)"

• Shouldn't 'much ado about nothing' be much adon't?

• It'd be great to be an angel with wings, but wouldn't it be cool if you could get gills, too?

• If someone who feasts on human flesh is a cannibal, should some who eats just a wee bit be called a cannibbler?

• An infant's nostril and index finger are same size. Yet, as we age our nostrils become cavernous and our fingers remain proportional. Hmmm.

• That which does not kill me I'll likely blog about at www.EightDaysToAmish.com

• Weathermen/women looking delighted by precip in the forecast. When it comes to local news, when it pours they reign.

• Studies show increase in sidewalk accidents as absorption with mobile devices rise. It's the fall of the roamin' empire.

• If I ran an airlines, I'd only hire pilots named Landon. I think it would reassuring to hear, "Today's pilot will be landin'. . . "

• Daughter, 5, disgraced the family by being the most shy non-performing kindergartner at the school assembly. Least she won't be a stripper.

• Emancipation is one of humanity's most enlightened gestures. I'm not sure ecatcipation would work so well.

• I like living in a small town. If you hear a horn honk it's a sign of friendly recognition, not a signal that road rage is about to begin.

• Happy 11.11.11! Be sure to share the joy of this numeric oddity by giving strangers in traffic the finger!

• I'll bet they eat a lot cereal in the land of milk and honey.

• If brevity really is the soul of wit then it should edit itself to read, "Wit hearts brevity."

• For the sake of accuracy, feminist attorney Gloria Allred should be called Gloria Allmakeup.