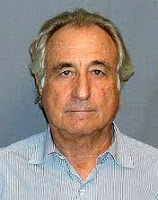 This December 2009 post features some dated references, but the point, a valid one, stands: humbug has nothing to do with a dislike of Christmas. It is, I think, a fun bit of word sleuthing that will allow you to be as annoying a smarty pants as me next time you hear anyone say, "Bah! Humbug!"
On U2’s 1988 album, “Rattle and Hum,” singer Bono intros “Helter Skelter” by saying, “This is a song Charles Manson stole from the Beatles. We’re stealing it back.”

I’m stealing it back.

Contrary to seasonal custom, humbug has more to do with WMD, the Salahis and Bernie Madoff than it has to do with a dyspeptic dislike for Christmas.

Let’s start with the American Heritage Dictionary which defines humbug as: “1. A hoax, fake; 2. an impostor or charlatan; 3. Nonsense, rubbish.”

Of course, our dictionaries are compiled by -- and I’m making what may be a wild and unfair assumption here -- pointy-headed dorks whose cloistered existences allow no popular culture references to illuminate the inner walls of their ivory towers.

And pop culture is from whence the power of the humbug misusage stems.

“Bah Humbug” is the pejorative phrase most associated with our most powerful story of Christmas redemption. It first appears on the third page of “A Christmas Carol.” Here’s the passage (and note the exclamatory punctuation that deliberately separates what’s morphed into a non-sensical run-on phrase):

A merry Christmas, Uncle! God save you!” cried a cheerful voice. It was the voice of Scrooge’s nephew, who came upon him so quickly that this was the first intimation he had of his approach.

He had so heated himself with rapid walking in the fog and frost, this nephew of Scrooge’s, that he was all in a glow; his face was ruddy and handsome; his eyes sparkled, and his breath smoked again.

“Christmas, a humbug, Uncle!” said Scrooge’s nephew. “You don’t mean that, I am sure?”

Scrooge, having no better answer ready on the spur of the moment said, “Bah!” again; and followed it up with “Humbug.”

Clearly, he’s referring in two distinct declarations that the idea of a happy holiday is an excessive hoax or fraud.

As the book progresses, each subsequent reference to humbuggery refers, not to seasonal Christmas elements, but to something that might be cooked up by the likes of Penn & Teller.

Inexplicable banging from down the stairs? “It’s humbug still! I won’t believe it.”

As Marley’s ghost begins to diminish into the ether, Dickens writes, “He tried to say ‘Humbug!’ but stopped at the first syllable.”

Need more proof? When the wizard is revealed to be a phony in the 1939 classic, "Wizard of Oz," the enraged Scarecrow sputters to come up with the most devastating insult his straw noggin can conceive: "You! You . . . humbug!" he says, to which the fraudulent wizard confesses, "Yes, I am a humbug."

In fact, the misappropriation of the term must be infuriating to an egotistical Dickens contemporary who so reveled in the joy of artful humbug that he in his 1855 autobiography called himself “The Prince of the Humbugs.”

That would be P.T. Barnum.

The satirical fingerprints of America’s most authentic impresario are today on every reality TV program and tabloid news story.

Barnum enjoyed his first commercial success in 1835 by purchasing for $1,000 an elderly slave woman named Joice Heth, who he claimed to be the 161-year-old nurse to George Washington. Paying audiences sat in rapt attention as the blind, toothless and withered ancient spun religious and patriotic tales about being the de facto mother to the father of the country.

Days after her February 1836 demise, Barnum allowed newspaper skeptics to autopsy her brittle remains. Hired medical examiners cried fraud and said, humbug, she wasn’t a day over 80. Barnum then fueled the uproar by releasing a story to publisher James Gordon Bennett of the New York Herald that said the autopsy was a fake and that the real Heth, now pushing 162 years old, was alive and well (and still drawing huge crowds) in Connecticut.

He then offered a third “real” story: that he’d found Heth in Kentucky, yanked all her teeth, taught her baby Gen. Washington anecdotes and that he’d capriciously increased her age by 10 years along the tour until she’d finally hit 161.

Barnum scholar Terence Whalen writes: “Every true story is rendered false by a succeeding explanation, and ultimately the various explanatory links seem to merge into a great chain of humbug.”

Today we are beseiged by humbug and the moralists decry that the decay is eating away at the soul of America’s character.

Roll with the punches, America. The hyperbole is a uniquely American phenomenon. Sit back and savor all the silliness.

And may each of you enjoy a warm and Happy Humbug this Christmas and all year long.
Posted by Chris Rodell at 1:47 PM

Thanks for sharing your info. I really appreciate your efforts and I will be waiting for your further write ups thanks once again.
Super Bowl Commercials 2012