Hookin' up with my old 4th grade teacher 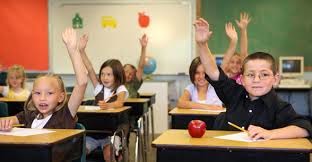 The situation reminds me of the obscure, but funny 2011 movie “Cedar Rapids” where Ed Helms is playing a nimrod who later in life starts screwing his old sixth grade teacher.

After they’ve done their on-screen love rumble he sits there and giggles, “Did you ever think about being with me when you were my teacher?”

Sigourney Weaver looks incredulous and says, “You were 12.”

It’s a little different with me and Mrs. B.

We have a history. I was her first.

Her first class, that is. She was the new teacher at Julia Ward Howe Elementary in Mt. Lebanon.

I was a hot shot 4th grader who’d just mastered tying his shoes so I was pretty full of myself.

I guess of all the teachers I’ve had, she’e one who either made the greatest impression or at least made the first great impression.

It was in her class I began becoming the person I’d always be — and I mean that in the parts of me I like to think people like: creative, cheerful, out-going. These were the aspects of me she encouraged and it was in her class they began to flourish.

When I say I have the hots for her, I don’t mean that in the tabloid way. She was the first teacher I remember liking enough to want to spend free time.

She laughed at my jokes. She didn’t talk down to me. She challenged me to become conversational. She read stories that made books an indelible part of my entire life.

That’s a wonderful thing to tell a person, especially one who is grieving. See, Jan. 14, 2004, was the day of my father’s funeral. She and her husband both came to pay their respects. It was very thoughtful.

So, of course, I’ve been eager to track her down so she could read my happy little book.

I spoke recently at a South Hills church and a woman rushed up to me and said, “Oh, I know a woman who is so disappointed she couldn’t be here. She’s your old 4th grade teacher.”

Mrs. B. and her husband were vacationing in Ireland.

The woman gave me all her contacts. I sent her a book and called a few days later.

We had a wonderful chat. She told me she thinks she was a terrible teacher her first year, and she wishes she could go back and do it all over again because she knows she’d be better.

I told her she was perfect.

It’s very satisfying to know I’m friendly with someone who so long ago made such a pivotal impact on my life and that she is proud of her role in the result.

I am now friendly with many of the wonderful teachers who’ve shepherded our daughters through elementary school.

I wonder if they feel they’re not doing as good a job as they should. I’ll bet many of them stay up late at night trying to divine ways to get precocious 4th graders to learn their daily lessons.

I wish I could tell them to not fret so much. I’m sure they’re doing fine.

Our lives have progressed like so many of the vivid stories she read to me and my runny-nosed little confederates.

We’ve lived happily ever after.