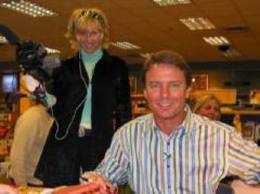 My eagerness for the summer return of the “Dallas” reunion soap is being usurped by my ardor in following an even more salacious drama.
The scandal shows share similar casting. One stars a Hagman, one a hag woman.
I’m talking, of course, about “The John Edwards Rielle-ity Show.”
You’d have to go to HBO’s “True Blood,” a show that stars vampires, to match a plot line that features so many soulless, sinister beings.
I contemplated Edwards in this 2010 piece in which me and some buddies were trying to determine the world’s worst man. As it was a golden era of men behaving badly, it was a lively discussion.
Tiger Woods was having his shenanigans play out; Georgia authorities were weighing whether to charge Ben Roethlisberger for raping an underage drunk; and Jesse James was being castigated for dumping America’s sweetheart for a Nazi. A Nazi!
And then we had John Edwards.
Worst man in the world?
Ladies and gentlemen, we have a winner.
I almost hope it emerges through expert defense testimony that Edwards is, indeed, a vampire. That would at least explain some of his behavior.
He must have felt so God-like thinking he was going to get away with it all.
He might have, too, had it not been for National Enquirer (same with Tiger Woods, too). I mention that out of pride of my 10-year association with them and because the mainstream media covering the trial insist on snubbing their journalism derring-do.
Now observers are eager to learn if Rielle Hunter will take the stand.
Guaranteed, “The Stand” wasn’t the posture Edwards thought of when he first laid eyes on Hunter.
I strain to avoid superficial observations about people unless they’re clearly superficial people so I think we’re on safe ground here judging both Edwards and Hunter.
She’s an aging slut, one who’s not aging well. She looks like the kind of groupie a more discriminating Mick Jagger would have passed off on Bill Wyman.
And Wyman, himself an historic slut, would have had a great time with her. She looks like she’d be splendid fun.
For one afternoon.
She doesn’t look like the kind of girl for whom you’d chuck your family and your reputation. Construction workers would be reluctant to introduce a woman like Hunter to mom.
Before I fell for my sweetheart, I had enough of a worldly past that I think I can describe the momentary attraction of women like her.
They’re easy. They’re experienced. They’re insatiable. Yes, there’s a base appeal to a sexy woman who is willing to give up her body for reasons zoo animals instinctively understand.
If I could go back in my past and address, rather than undress, those women of low reputation a wiser me knows exactly what he’d say . . .
Thank you! Thank you very much!
But I was in my 20s, single and carefree about society’s opinions -- and, boy, the more things change the more they stay the same, I guess. And, to be fair, being seen with me wasn’t exactly launching any of these girls into circulation at any of the area debutante balls.
But how Edwards, a man with everything to lose, fell for her and allowed her to trainwreck his entire life is an unfathomable mystery. How could he have so little regard for his family? For his supporters? For his country?
We’re talking about a person who will go down in history as one of the most vile and manipulative people the world’s ever known, someone so beyond redemption it’s a virtual certainty they’ll go to a grave destined to be unmoistened by the tears of all but a sad, lonely few.
And that last paragraph isn’t referring to Hunter.
Next to Edwards, the gold-digging whore’s the class act.