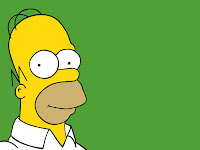 I was tempted to try and cap the number of listed blog followers at two because the widget looked like the marquee for a prize fight between two classy ladies.

And I know a lot of guys would think that’s cool.

But then a third classy lady showed up and now I’m in Twilight Zone existence where I can either pretend having only three blog followers doesn’t bother me, or I can start sneaking around onto the computers of absent family and friends and perpetuating the fraud that they read my desolate home blog, www.EightDaysToAmish.com.

My infant blog will turn 1 in May. Like human infants, the thing needs a lot of help. It’s starting to show some personality, but on some days it does nothing but produce big stinky messes that even dedicated loved ones run to avoid.

But blogging to three committed followers beats pacing around and talking to myself, which is about what I’d been doing before I’d begun posting. Doing the blog started to make sense because I had what I thought were good story ideas that would evaporate into the ether after a round of stinging rejections from currently unemployed editors who now spend their idle hours wondering what went wrong at magazines that no longer exist.

And it’s been great. I’m a big blog advocate (10 years ago people might have confused that phrase for an insult). I encourage anyone interested in becoming a better writer to start and nurture one. It’s like exercise. Do a little bit every day and you’re bound to get stronger.

One thing that’s surprised me is the way the blog seems to resonate with women. Though out my entire life, no woman, including the one who married me, has ever been eager to seek my opinions, dote on my wisdoms or pretend the 99th retelling of a sixth grade fart joke was funny.

But God bless the guys. They love that stuff. And so do I. I’ve been lucky that I’ve always found a happy circle of guys who like to sit around drinking beer, talking sports and dissecting the quality and cultural impact of recent Simpsons episodes.

That’s who I thought my blog readership would hit, and to some degree that’s been true. I hear from scattered guys and old buddies who say they enjoy the blog. I have two buddies who work at the local electric company who say they’re big fans. Every time my lights flicker, I figure Ron and Poppy are slacking off a little to read my latest post.

And I know of other regular guys who read, too, but none of them would ever dream of saying something nice about me in the comment section or posting a picture that would indicate they followed me. I understand, too. It would kill me to say anything nice about a buddy with whom I never feel closer than moments after I’ve unleashed a cruel and profane zinger that zooms around our hateful circle of friends.

Yes, there are few burdens regarding etiquette when it comes to being a guy.

But that makes necessary self-promotion difficult.

A perfect example: When I wrote about an honest-to-goodness fan letter I got from Arnold Palmer, sent out a bunch of obsequious e-mails to my guy friends saying, “Hey, thought maybe you’d want to check this out. I got a cool letter from Arnold Palmer. If you have a few minutes, please take quick peek. Thanks!”

Within seconds, one of my buddies responded in a devastating gang e-mail, “Will do, Mr. Attention Whore!”

I could practically hear all the nasty snickering roaring through my computer screen.

That’s why the persistent and flattering comments from refined ladies takes me aback. They encourage me. They offer thoughtful interpretations. They make me wish I was blogging back when I needed a prom date.

At first, I thought the readers were women who were eager to study the thoughts of a Jurassic-era male who still enjoys regular guy things like excessive bar time, baseball, The Stooges and arm pit instrument symphonies.

But the trend’s one I cannot ignore.

They can’t all be anthropologists.

I’ll not mention it again, but if you’re a regular reader, please take a moment to post your little picture in my followers widget on my home blog and give my battered self-esteem a momentary nudge toward the affirmative. And thanks to the brave trio who’ve already stood up and testified.

My goal is to get maybe a dozen little pictures in the widget so it’ll at least look like a tidy blog version of the Hollywood Squares.

Then with that little bit of respectability, I’ll have time to sneak around in the public libraries and fatten up the followers with fakes like I suspect other successful bloggers do.

I’ll ask you all to do the same for me.

Mr. Attention Whore will be grateful.
Posted by Chris Rodell at 10:54 AM

This is downright funny. And true. And funny. I don't care who you are.

I felt the same way when I only had two tiny heads in the box. :) Just wait until you boot up the computer one morning and, crikey, you are down one or two followers.

Aw heck Karen, Chris is always funny. I've been following him without knowing how for a cuppla' weeks now. Time to belly up to the bar and buy a round, I guess.

Chris, your posts are one of my days' bright spots when they show up in Google reader. You ever find yer' way up to Wisconsin, give me a call and I'll buy that round.

Hey, thanks! That's a great response in a short time. It doesn't look so lonely anymore.

And thanks Peter and Karen for taking the time to comment with your kind words. It means a lot to me.

You guys are the best.

Thanks for visiting my blog and I enjoy your post. Yes, women seem to blog more than men which isn't surprising since women also buy 80% of books, including books for their spouse or boyfriend.

hehe, your post made me giggle. I've been blogging for almost three years now, and it still tickles me whenever I get comments or I discover that people are subscribing to my blog. It's a nice feeling. :)

And yup, I'm getting ready to add myself to your followers! :)

Great post! I've had my own blog since September, and so far, it's been a real hoot. Again, enjoyed your guest post over at kimmi's the other day also. Write on.

Thanks also to Angie, Thomma Lyn, and Gutsy Writer. Great to have you guys stopping by.