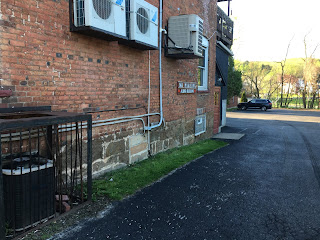 Looks like it’s yet another day at The Tin Lizzy where it’s just me and Buck — and you know what that means.

Every toilet seat in the building is UP!

Because you just never know …

• I’m about finished with the best book I’ve read in 10 years. It’s “Bottom of the 33rd: Hope, Redemption & Baseball’s Longest Game,” by Dan Barry (2012). I’ve read a lot of great books during that time, but this is the first one since Tony Horwitz’s “Confederates in the Attic” that makes me want to buy by the box to hand out to friends. It’s that good.

• If you happen to see Buck, be sure to tell him how nice The Tin Lizzy lawn looks. It was mowed over the weekend and he takes great pride in its appearance. That’s it in the picture.

• The longest game in professional history happened April 18, 1981, at McCoy Stadium in Pawtucket, Rhode Island, between the Rochester Red Wings and the hometown Red Sox. The game included future Hall of Famers Cal Ripken and Wade Boggs. It was supposed to start at 7:30, but was delayed 30 minutes to correct a lighting malfunction. Once it “finally” got underway, it went for the next eight hours until it was suspended in the 32nd inning at 4:08 a.m. It was so cold that players began burning bats and benches in trash barrels to warm their hands.

• Some day I’m going to take a lawn chair, a blanket, a beach umbrella, spread ‘em all out on the Tin lawn and have a little picnic.

•Pawtucket pitcher Luis Aponte was pulled from the game at 3 a.m. He went home to find his wife was furious and, suspecting he’d been out drinking, wouldn’t let him in. “She said there was no way a stupid baseball game would ever go that late on Easter morning,” he said. Refused entry and with everyplace closed, where did Aponte go? “Back to the ballpark to watch the end of the game.”

• The Tin lawn would make a newsworthy offbeat cemetery for maybe three guys all nicknamed “Slim” or one freakishly tall dude nicknamed “Stretch.”

• My gypsy parking lot book sale can be deemed a success. Sold 14 books and was cheered by all the friendly encouragement.

• You can protest the quarantine closures etc., but you should sign an affidavit stating that if you catch the coronavirus you will agree to not seek treatment in a hospital until those who adhered to recommended considerations have been treated and all the doctors and nurses get to stay home for two weeks until they’re relaxed and caught up on NetFlix.

• It was my turn to pick the movie the other night. I took a chance and picked “Terms of Endearment,” 1983 best picture winner. It was generally well-received. I like it alot. I’d forgotten it was written by “Lonesome Dove” author Larry McMurtry.. I can never think of McMurtry without recalling him saying when he was growing up in West Texas it was so desolate his phone number was 10.

• Rochester outfielder Dallas Williams set a still-standing record for futility by going 0-for-15 at the plate causing sportswriters to say “he had a whole bad month in one night.”

• Only 17 fans remained through the entire game. Major League Baseball rewarded them each with lifetime passes to any game. The gesture caused Pittsburgh broadcaster Beano Cook to remark, “Haven’t they suffered enough?’

• After a string of frantic calls, the league president suspended the game after eight hours. The game resumed June 23 with Pawtucket needing just 18 minutes to win in the 33rd inning. Future Met star Bob Ojeda was the winning pitcher; Rochester’s Steve Grilli was the losing pitcher. He’s the father of former Pirate standout Jason Grilli.


• Sorry, this went on a little longer than I expected, but these things happen in bloggin' and baseball.
Posted by Chris Rodell at 12:13 PM