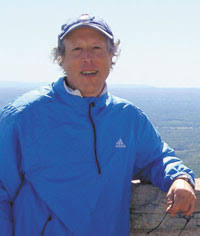 Making your way in the world today takes everything you’ve got.

Taking a break from all your worries sure would help a lot. Wouldn’t you like to get away?

By now, I’d say about three-quarters if you jumped right to the chorus. Sing it with me!

In a time of chaste isolation and self-quarantine, could there be a more poignant and tuneful lyrical yearn than Gary Portnoy’s “Where Everybody Knows Your Name,” the 1982 bar anthem he co-wrote with Judy Hart Angelo?

While much of America is binge-watching the blood-drenched duplicity of “Ozarks” or the bizzaro appeal of “Tiger King,” my wife and I settle in each night to enjoy a nearly 40-year-old network sitcom that  only once dared to broadcast a pair of nipples (they were Woody’s).

The show still holds up. It’s still hilarious. And a big part of its charm will forever be Portnoy’s understated, yet euphoric theme song, the slender 91-word ditty  that TV Guide editors in 2013 declared the “Greatest TV Theme of All-Time.”

Given the pandemic backdrop, I think it deserves even better than that.

“Where Everybody Knows Your Name” is to sitcom theme songs what John Lennon’s “Imagine” is to humanity.

It’s an aspirational reflection on the flawed yet jubilant communal transactions that take place when, well, a bunch of mostly dysfunctional white people who like to drink and bitch get together.

And, damn, if that son of a bitch isn’t catchy as hell.

I wonder about Portnoy, 63. He and Hart Angelo also share writing credit for sitcom theme songs that kicked off “Mr. Belevedere” and “Punky Brewster.” Portnoy wrote songs for Air Supply (“I’ll Never Get Enough of You”), Dolly Parton (“Say Goodnight,”) and Cheryl Ladd (too murky for my meager research purposes).

He’s best known for performing what is arguably one of the most popular songs in history. A whopping 84.4 million viewers watched the May 20, 1993, “Cheers” finale — double “All in the Family” finale and second only to M*A*S*H (105.9 million). And guaranteed most of us at least hummed along with Portnoy.

I saw a pre-COVID-19 item that listed dates where you could see Portnoy live.

So he’s still performing “Where Everybody Knows Your Name” in places full of people who don’t know his.

I doubt the song’s made him rich, which is a pity because circumstances may lead him to resent it.

Portnoy on Stage: “Any requests?”

Portnoy: “I just played it.”

You could say it makes me, er, cheerful!

We’re so hyper-focused, justifiably so, on social distancing I wonder if we’ll ever be able to return to the days when there was no hesitancy in shaking a hand offered in friendship.

I wonder if we’ll ever feel comfortable congregating in rooms full of strangers on the faithful belief that we’re in a happy place where people go because we intuitively know our troubles are all the same.

They’re places where people think it’s a valuable use of time to spend hours discussing the irony of a man writing a song about everybody knowing your name toiling in anonymity.

So cheers to Gary Portnoy!

“Cheers!” just wouldn’t be the same without you.

Growing nostalgic for when TV was more stupid