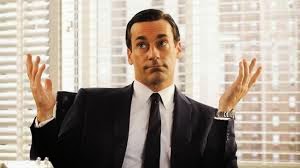 Anyone who endeavors to conclude a landmark television series with even a splash of panache ought to send a gift basket to David Chase.

It’s because of Chase, creator of “The Sopranos,” that the bar is forever set so low on shows like “Mad Men.”

People knew going in that the show would be satisfying as long as it was better than the ending for “The Sopranos.”

Heck, we knew that as long as it provided ANY ending.

And I loved this ending.

Well, not Betty. But she was always a bit of a wet blanket.

I don’t know why. It couldn’t have been because she suffered from any unreasonable pressure to remain sober.

In fact, nobody did.

None of the history lessons ever informed me that sobriety was such a ‘60s afterthought. Sure, I knew most of the young people were experimenting with altered realities on the free love college campuses.

And where’s a reliable time machine when you need one?

I just didn’t know the stuffed shirts against whom they were rebelling were all gooned up, too.

And doesn’t that explain a lot about the history of the ‘60s!

I’ve always contended they made a mistake when they called the Jon Hamm character Don Draper.

He should have been Don Drinker.

It took me until late last year to get on the “Mad Men” wagon. Val and I’d checked out some of the early episodes, but I found something off-putting about each of the characters. Thus, they failed my companionship test which is: would I want to sit down and spend an hour eating lunch with any of them?

If the answer is no, then why would I want to watch them going about their mean little lives?

Sure, Roger was hilarious and seemed incapable of drawing even a single sober breath. But I’m already friends with about three dozen guys just like that. Three of them, in fact, are already named Roger and the redundancy seemed unnecessary.

The show finally caught my interest about a year ago when I’d wake up at 6 a.m. on Sunday mornings when AMC was running 3-hour chunks of it. I decided to settle in.

It’s exquisitely shot. Nothing is amiss. The sets were museum quality. And I began to appreciate how the flaws in the characters propelled the stories.

Plus, I adored how they wove our tumultuous history into every story line.

It’s a decade in which the ultra-liberal Lyndon B. Johnson won the presidency by a landslide, only to be hounded from office four years later in an landslide presided over by the ultra-conservative Richard M. Nixon.

What the hell was going on?

Well, if you watched “Mad Men” you realized a lot of hell was going on.

We didn’t start the fire.

I found the finale’s conclusion euphoric and for a show that so often plumbed the depths of despair, emphatically hopeful.

It straddled the line between parody and homage, a fitting stance for a triumphant show that so elegantly danced that line throughout an epoch that pirouetted between the waltz and The Funky Chicken.

And that’s as good a place as any for me to wrap it up.

I hope you found the ending satisfying.

Either way, I think I’ll send David Chase a basket of onion rings for setting the bar so low.

Growing nostalgic for when TV was more stupid

“Breaking Bad” vs. “Sopranos;” and the winner is …

The TV has become the penis