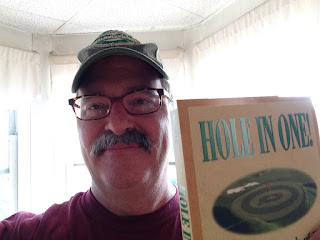 It’s probably so obvious they don’t even bother to mention it in Business 101, but no reasonable business plan involves giving the product away for free.

I’ve had successful business people ridicule me for giving away so many books for free. But if I had a bizzy-ness plan, I wouldn’t be a writer.

I’d be a bizzy-ness man.

So I give away a lot of books. Mostly “Use All The Crayons!” I do so with this title  because it’s the book most likely to make people happy and if I can make anyone happy for nearly nothing, by God, I’m going to do it.

I rarely give copies of “Palmer: Homespun” books away. People really love that book so they’re happy to pay for it. “Last Baby Boomer” I often discount in the hopes it’ll lead to grassroots interest in the book of which I’m most proud.

I mention all this now because I just gave away the last copy of what I consider my first real book.

But, really, three of the books were like magazine articles that got out of hand, or jerk-off joke books. One was, “Manly Golf: 50 Ways to Muscle Your Way to Victory!” It came with sticker tattoos.

But there was one book, my first “real” book, that for some reason I rarely mention when talking about my roster.

It’s “Hole in One! The Complete Book of Fact, Legend and Lore of Golf’s Luckiest Shot.”

Published in 2003, it was called in 2009 “the Bible on golf’s most amazing shot” by, ahem, The New York Times. That’s prestigious. None of my other books have been praised by The Times.

So why don’t I talk about it?

I think it’s because at some point I began to resent the hell out of the book. I don’t remember a single royalty check, group purchase or simple one-to-one cash transaction.

This is because I’d early on thought it would be nifty promotion if I’d give a free signed copy to anyone who approached me with a verifiable ace.

More resentment. I, the author of the most comprehensive book on aces, has never seen nor had one of his own.

So I was not unhappy when I noticed all I had left were two ace books.

And I was not at all unhappy when my friend Denny C., a retired Hempfield high school guidance counselor and a true gent, aced a local course and earned the second-to-last book.

Coincidentally, Denny and I were golfing last month when he hit a ball that looked like a sure ace. As the ball was sailing straight at the cup, I wasn’t rooting it on. I wasn’t ecstatic with split-second anticipation.

No, I was thinking, gee, what’s the etiquette if this goes in? Do I give him another ace book?

My quandary was averted when the ball came to rest 4 inches to the left of the cup and last week I learned my friend Jan L. aced the 10th hole at one of my favorite courses, The Palmer Course at Stonewall Resort in Roanoke, West Virginia.

Thus, my last ace book is gone. I’m no longer golf’s self-appointed welcome wagon to one of game’s rarest club, one to which I don’t belong. I wrote the book on aces, but if there’s a secret handshake no one’s telling me.

I have no more self-imposed obligation to congratulate those who’ve proven far more fortunate than I.

I’ll just continue to simmer that while, according to The NYTimes, I’m the factual repository of more great stories of good fortune than anyone in golf, that same fortune has teased and evaded me for nearly 50 years.

Turning the page on golf calendars

Email ThisBlogThis!Share to TwitterShare to FacebookShare to Pinterest
Labels: Chris Rodell, golf, Hole in one