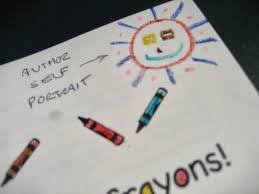 Just one day later and I can’t remember how I found something I will now never forget.

Kinda sounds like a sentiment that ought to be on a floral anniversary card (Happy Day-Before 23rd Anniversary, VLR!).

But, no, this wasn’t about anniversaries, birthdays or other hallmarks of familial importance.

This is all about smiles!

The American Dental Association recommends you see a dentist every six months. Or you could just once read “Use All The Crayon! The Colorful Guide to Simple Human Happiness.”

While the dentist is drilling your teeth.

That’s the YouTube testimony of certified wellness guru Deborah Edwards, who was on the Mind Body Spirit Network giving her entirely unsolicited review of the book I still believe will one day explode into the national consciousness. And if it does, it’ll be because of fans like Edwards and videos like the one I link to below (I hate to direct you elsewhere once I have your attention)

Allow me to summarize.

This was on the wellness network’s High Vibe Tribe Book Review.

Host/Founder Liz Gracia intros Edwards who begins to beam as she holds up an image of the book’s cover. She is in her Happy Place.

She talks about the book’s structure, cites some examples and says the book will brighten every life. That’s all good. Then she takes it into a realm I never imagined. And remember, a man once said me and this book cured his hangover.
“I was in the dentist chair,” she says. “I was listening to this book and my dentist is drilling in mouth — and I’m laughing! It kind of set him off a little bit. He kept going, ‘You okay?’ And I’d say, ‘Yeah. Ha! Ha!’ He finishes and says, ‘Deborah, I gotta tell you, I’m not accustomed to people laughing in my chair.’ It’s just such an enjoyable book.”

I’m watching this and it’s such a great story I begin to feel faint, like an unprincipled dentist had just given me too much nitrous oxide.

She concludes and it’s apparent her buoyancy is contagious. Gracia is laughing. She can’t believe my book made Edwards giggle through a dental drilling. “I’m assuming,” she said, “you had novocaine.”

So, in the last six months …

• A popular Governor agreed to provide the foreword for my new book. Republican Tom Ridge says, “Rodell writes about Latrobe the way Sinatra sings about New York, unflinching about the gritty realities, but with abiding affection and relentless positivity about the future.”

• A dear friend who ministers at a Ligonier church based her sermon on “Use All The Crayons!” It was wonderful. Why haven’t I blogged about that heirloom honor? I believe it would be impossible for me to write about without being blasphemous. For example, “It was the best time I’ve ever had in church. I think it was cause we spent more time praising me than we did what’s His name.”

And now comes this incredible endorsement in a forum rich with opportunity.

I consider these substantial achievement and wonder …

How the heck can I guy who can boast all that be so broke?

I remain convinced — now more than ever — that I’m on the verge of a breakthrough that’ll fulfill the latent promise of all these misspent years, nearly three decades of cheerful dissipation.

But what if never happens?

It’ll for me be a mortal disappointment I’ll need to numb.

Good thing I now know where to find some surplus novocaine.

Our greatest American speeches and why mine’s better

Email ThisBlogThis!Share to TwitterShare to FacebookShare to Pinterest
Labels: book reviews, great books, Use All The Crayons, wellness