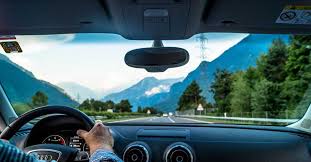 I didn’t notice the stowaway until I began accelerating and when I did I became so mesmerized I nearly drove off the road and straight into a tree.

Some six-legged insect had affixed itself to my windshield and was hanging on for dear life. About the size and stoutness of a kid’s tiny Tonka toy, it looked sort of like what you’d get if you mated a cockroach with a grasshopper. I gave up scanning insect mug shots when I feared I was becoming, well, all bug-eyed.

I’d just turned left out of the Tin Lizzy on my way to Giant Eagle to pick up some lunch groceries.

Was it on my windshield on purpose or by accident? Was it trying to flee an oppressive bug spouse, a real louse? Or was it old-fashioned wanderlust.

I’d be traveling 2.3 miles on Arnold Palmer Drive past Arnold Palmer’s home, office, golf club and enough other Palmer-named landmarks to have me again wondering why we just don’t change the town name to Palmerville.

If the bug was enjoying the scenic ride it didn’t show.

Maybe it was a Nicklaus fan.

I say “it” because I was also unable to determine if it was a male or female. If it had a gender-defining penis — or penises; logically one per each pair of legs — they were so microscopic it was a don’t ask/don’t tell situation.

While we’re on the subject, cockroaches are to literalists like me almost as poorly named as the titmouse, which disappoints on every level.

I was amazed at its ability to stay stuck to the windshield of a car going nearly 40 mph. Each of its six feet were no bigger than a period on a page. How is that possible?

Maybe it had been walking on gum and gotten its feet really sticky.

I tried to divine what was in its heart. Was it sad? Carefree? Do bugs even have hearts?

Life without a heart or a penis would be a real drag, but that’s from a purely male perspective.

So I make it all the way to Giant Eagle and the bug hasn’t budged. I shopped hurriedly to see if it’s still there or has maybe while I was waiting for chipped ham learned to communicate and convey its intent, kind of like the namesake spider in “Charlotte’s Web.”

I decide if it’s still there I will make every effort return it to its approximate homestead. I envision a homecoming scene where this bug and its equally weird-looking family have this homecoming like it’s the Biblical return of the prodigal son.

It’s still there! Hasn’t moved even a hair.

I begin to race back, which is good, because I all of a sudden have a furniture truck with an impatient driver right on my rear.

My plan is give the bug a jiffy jolt of wiper fluid to gently dislodge it from its impossibly smooth perch. Thus startled, it’ll look back at me and I’ll point to the safety of the sidewalk.

He clung so steadfastly to the windshield I started to get pissed and really blasted the wiper fluid. The fire hosing finally severed its bond and caused it to cartwheel and begin to wildly flap its wings. It rolled over the roof and smashed — SPLAT!— right into the windshield of the furniture truck.

I could tell it was a direct hit by the brilliant arc it made when the annoyed driver used his wipers to try and vacate the stain.

A grand adventure that began with a remarkable feat on one windshield ended with a smear on another.

And now who gives a shit?

Besides, I mean, your basic dung beetle, but that goes without saying.

Stinkbug evolution anything but rosy

To Bee or Not To Bee