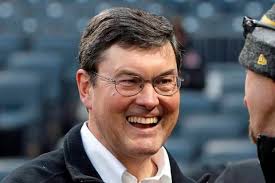 He’s one of the most unifying figures in the history of the Pittsburgh Pirates. He’s raised millions for unfortunates and, wow, the man has 3,000 hits.

We’re talking Bob Nutting! The Pirate owner since 2007 is a tremendous unifier.

Worth $1.1 billion, Nutting, 57, raises millions for unfortunates by charging as much as $12 for warm domestic beer. Sure he’s the recipient of all that dough, but I consider him unfortunate because he’s such a defective human being he cares more about loot than love.

As for Nutting’s 3,000 hits, I’m talking about the number of times each week disgruntled Bucco fans take to social media to call Nutting a cheap moron.

My disdain for men like Nutting is usually on simmer. My stove top is too busy boiling over Trump, climate change, the publishing industry and my own multiple failures for it to have a free burner for someone as trifling as Nutting.

But then something will happen with Nutting and my hatred will resume its bitter potency.

It happened in 2009 when I saw Nutting while we were both attending a Bob Dylan/John Mellencamp/Willie Nelson concert. Instead of congratulations for his musical tastefulness, I publicly berated him for putting profits over performance.

Then something even more provocative happened Sunday.

When I went there for the first time in 2017, I wrote how it’s one on the 10 coolest places in Pittsburgh.

His dying with exactly 3,000 hits is divine symmetry. Because in 50, 100 years from now, visitors to the MLB Hall of Fame will look at the list and its — who knows? — 70 or 90 members and all will focus on two names: the first, whomever that may be. And the last, which for perpetuity will be Roberto Clemente.

Sassy youth may wonder, who is this dude? Did he hang on past his prime to get that milestone hit and retire?

Then some old timer will tell the story of Clemente.

See, he had every intention of playing more productive years. But fate intervened.

Clemente died in a plane crash on a mercy mission to take life-saving supplies to devastated victims of a Managua, Nicaragua, earthquake. The plane crashed on takeoff into the sea near San Juan, Puerto Rico.

Each member of the Pirates attended his funeral but one. His best friend, Manny Sanguillen, did not. He instead with aching poignancy spent the next 30 days diving in the ocean trying to find the body of his friend. The body was never found.

Why Hollywood has never filmed the Clemente story is a mystery.

But there’s an even bigger mystery and that’s why Clemente’s team refuses to acknowledge, much less support, his namesake museum.

I learned this during my first visit and had it confirmed Sunday. Like a good attorney, I was asking a question to which I knew the answer:

“How much support does Bob Nutting and the Pirates give the museum?”

Gary, our excellent guide, responded with evident bitterness: “How much is 2 minus 2? The answer is nothing.”

I say we prove him correct. If you’re thinking of attending a Pirate game, consider instead touring the Clemente Museum. Shouldn’t be too difficult. There were 20 in our group Sunday or about two or three more than were at the Pirate game.

Score one for Roberto.

Really, the whole notion is preposterous, a man like Nutting believing he’s in competition with the ghost of the great Clemente.

Of course, Nutting is nothing if not a shrewd businessman.