Jokin' 'bout the joys of jail 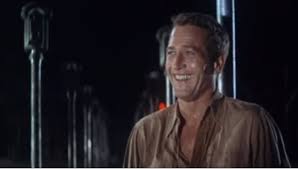 It would be a better story if I could honestly say I was there the night Capt. Tony told my buddies he didn’t respect any man who hadn’t spent at least one night in jail.

But that wouldn’t be the truth.

It was Spring Break back in 1985 and my buddies were in Key West while I was back home in Pittsburgh (no dough). And it would be an even better story if I could honestly say at that very moment I was in jail for doing something bone-headed like, say, being drunk and cutting the heads off of municipal parking meters. That’s how they snagged Lucas Jackson in “Cool Hand Luke,” my favorite character from my favorite movie.

I wish I had been there and had heard the words straight from the mouth of Tony Tarracino, aka Capt. Tony, legendary owner of his namesake bar immortalized that very year by Jimmy Buffett in “Last Mango in Paris.” This was back before Buffett  became a conglomerate dabbling in restaurants, satellite radio, senior living.

Back when he still had what I guess you’d call beach cred.

The captain believed any man worth his salt had to at least once give The Man The Finger and spend at least a night in the slammer. It was a rite of passage.

It made sense to me and — boom — like that within the next year I was tossed into the Dormont Muncipal Jail for a crime I did commit (sorta).

Why I chose to follow the second-hand advice of a drunken old sea captain over the respectable multitudes urging me toward prudence and occupational responsibility is the story of my life.

But — aye, aye — the captain was correct. Doing at least one night in jail did bestow some worldliness. It gave me a great story (link below) and led to what was until recently one of my favorite bar conversation starters:

“Tell me about the night you spent in jail.”

You’ll be surprised by how many now-respectable men have had momentary bouts of lawlessness that led to a night in the Iron Bar Hotel.

The stories are often hilarious, even more so because the illegality is usually something they were once ashamed to admit.  What was once taboo has become humor.

The stories usually involve drugs, drunkeness and midnight mischief. I’m friends with a guy who stole a bulldozer and took it for a 6 mph joy ride down Main Street before realizing too late he was unskilled at knowing how to bring the machine to a complete halt.

I know some guys who were busted breaking into a car impound lot to steal back their car and in their drunken confusion would up stealing the wrong car.

So I felt I was on stable ground Friday when I asked a buddy my light-hearted question: “Tell me about the night you spent in jail.”

I’ll reveal no details that might lead any snoops to track down his identity except for this: His incarceration made national news and involved a cross-country ride in the caged back of a van driven by the man who would become famous as “Dog The Bounty Hunter,” and included two months with Unabomber Ted Kaczynski as his cell mate and that the terrorist was pretty cool.

It would be a better story if I could say my friend busted Ted for using his toothbrush, but that wouldn’t be true.

It was the most compelling (and entertaining) tale I’ve ever heard in response to my jocular question. And it was the last time I’ll ask it.

Our scars are the most interesting and revealing features of an aging man. But there are sound reasons why some men tend secrets.

Who am I to tap dance among the tombstones in search of bar giggles?

And I fear I, a mostly privileged aging white dude, might one day with buddy-buddy familiarity ask the wrong black man to regale me with some jaunty tales about his experiences with the law and he’ll want to kill me.

I’ll have it coming.

Life & Death of the prisoner with the big penis

Escaping “Escape from Dannamora” & the joys of bustin’ out