The why & how of my brand new signature -- it's legible! 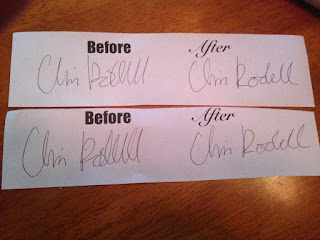 I heard what by now are familiar compliments from robust audiences this week in Mt. Pleasant and the South Hills of Pittsburgh.

They said I was witty, eloquent, composed and other gushy compliments that would convince my family everyone who comes to hear me talk is either shit-faced or susceptible to mass hypnosis.

But of all the heady praise — and I’m on a bit of a roll here — one stands out as the kind I’ll likely replay over and over in my mind.

A man said I had beautiful signature.

I think by “beautiful” he meant “legible.” But it can be both. And it is because you can read it. Yes, after about 48 years of signing my name in cursive, I finally have a John Hancock worthy of John Hancock.

I’ve been signing a lot of “Arnold Palmer” books lately; 200 this week, in fact. That’s how many UPMC Children’s Hospital of Pittsburgh Foundation bought in advance for me to bring to a gala fundraiser Tuesday at Laurel Valley Golf Club on Tuesday. I’ll be the featured speaker for both lunch and dinner.

That was going through my head last week as I cracked open the first box of 25 books. and began my traditional scrawl.

My standard inscription in block print is: “This is NOT a golf book. This is a LIFE book!”

That’s true, too. And people seem to like that. I know many authors merely sign their names. So my note is above and beyond.

Then, gulp, I’d get to the actual signature. See for yourself.

The R could be a P; the o masquerades as the circular part of the d; and then the d loop, the e and the two l’s form like a chorus line of showgirls too drunk to know when to quit kicking. (Note: For years I teased my daughters by telling them our names are spelled with three l’s: “The second l is silent, but the third is silent AND invisible.”)

It’s always embarrassed me when people ask me to sign their books.

I contend the stakes are higher for me because the book is about Palmer, who was famous for both his penmanship and the promiscuity of his autograph. He’d brag that his name was worthless on eBay because he’d signed so many.

And it was immaculate. Surgeons suturing scars on supermodels were less careful than Palmer was with a pen.

Now, it’s ridiculous for me to hold myself to the Palmer standard.

No one expects me to golf like he did.

But the poor penmanship made me look sloppy. So about four boxes in to the eight-box stack I decided enough’s enough. I decided it was time to alter my signature, to give it some manners, to make it appear presentable.

I took a stack of scrap paper and began to practice. I’d do about 15 at a time — just the surname. I think my Chris is decent.

It was very painstaking. For some reason, we’ve all been conditioned to think a good signature is a fast one. That might be the root of the problem.

Palmer, who may have signed more autographs than anyone in history, didn’t think it ought to be done quickly. I saw it. He took his time to make it appear perfect.

That’s what I began to do.

But if you want to improve yours, I’d encourage you to persevere until you develop what I think of as a “twitch.” That’s when your hand takes over and leaves your bossy-ass brain in the dust.

I only wish I’d have embarked on this character-enhancing project before I’d signed so many books, like the one I did for you, maybe?

So that’s all for today. I just wanted to share with you the news that you can change something as elemental as your very signature. It just takes a little will, a little patience and a little practice.

Thank you for reading and have a great weekend.

This is me, signing off and signing on.