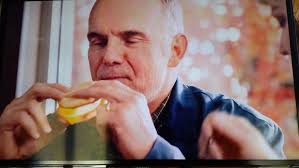 I was succumbing to a morning need for fuel when my conscience was confronted with a WWJD moment.

These happen to me all the time, mostly in places where the risen Christ wouldn’t be caught dead, places like the drive-thru lane at the Route 30 McDonald’s.

Now, I know better than that. I know McDonald’s is unhealthy, its entire corporate premise is environmentally belligerent, and it owes its colossal origins to Ray Kroc, one of America’s most despicable scoundrels. (I highly recommend the ’17 Michael Keaton flick “The Founder”).

He’d breakfast at The Youngstown Grille!

Jesus hasn’t been there (yet!) but Arnold Palmer used to go there all the time for French toast. So if you can’t get a Yelp! review from The King of Kings getting a posthumous one from The King will have to do.

But on some days I just want fast fuel and that means fast food. I get a Sausage Biscuit w/ cheese and a small Coke for $2.32. How they do it for so little is a wonder. I donate the 68-cent change to Ronald McDonald House because it’s what I believe Jesus would do.

So I pull in and that’s when I see Latrobe’s homeless man. I’m sure there are many more and having even one is a defeat for a community I’m proud to call home. But this gent is our most visible one.

He pushes a Giant Eagle grocery cart that contains what I assume are all his earthly belongings. He looks maybe 50, but who knows? Elements of this harsh winter may have pre-maturely aged him.

I don’t know what Jesus would do, but here’s what I did:

In addition to my usual order I had them throw in an Egg McMuffin that set me back another $2.79 for a total of $5.11 (the Golden Arches charity scored another 11 cents so I was feeling pretty good about my pious altruisms).

So I clear the second window and see the guy is on the move. He’s pushing his cart toward Rt. 30.

I roll down my passenger side window and shout, “Hey, man, I have something for you!”

He turns to look then coldly ignores me. His rudeness has me wondering if he’s a former literary agent. That’s a common literary agent’s reaction to my offers. He continues pushing the cart toward the highway crossing.

And the chase is on!

I’m stuck at the red light watching him hump it up the hill on the driveway between Sharkey’s and the Walgreens. I pass him and pull into Walgreens parking lot. I park the car and get out with that steaming 410-calorie gut buster in my hand.

He sees me again and keeps on going. It’s like I’m dealing with a skittish cat.

“Hey, I thought you might like an Egg McMuffin,” I say. “It’s still hot. Should hit the spot.”

Nothing. He keeps on going.

Me, I surrender. I did what I thought was my best and I could not break through. He was unwilling to accept my charity. I get back in my car and drive away and as I do, I give him one last look. What I see surprises.

He’s beaming at me. Honest, he’s grinning like I would if he’d just handed me a McDonald’s sack stuffed with $100 bills.

It’s very odd. I spend most of the morning confused by the entire episode.

What would Jesus do?

I like to think He’d persuade the man to get in his 2007 Saturn Vue with 197,000 miles on it and drive him home where He’d nurture him to soulful health.

I’m tempted to do that very thing. If it works out, it would be the best thing I’d do in my entire life.

But Jesus never had to ask Himself WWVD?

What would Val or any spouse do if I showed up with a disheveled stranger? She barely tolerates the hours I spend with drinking buddies who have somewhere to go when the bartender yells last call.

So I ended up tossing the Egg McMuffin in the trash and left Latrobe’s most visible homeless man to fend for himself, and me wondering if my good intentions will make a positive difference in my Judgement Day fate.

I hate to see the sandwich go to waste, but I’m one of those guys who worries about saving his figure while still saving his soul.

A $5 solution to homelessness

Return of the creepy homeless posers