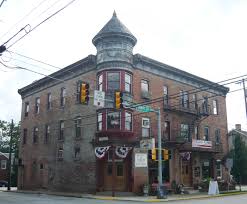 First off, it says something about the quality of our dead regulars that if I could summon their spirits, Arnold Palmer would come in fourth.

He’d be behind Zack, Wayne and Dave. All three were fixtures here at The Tin Lizzy, the place where the good times never die …

But some of the regulars do!

As upbeat promotional slogans go, that one’s probably a non-starter. But it shows the kind of outside-the-pine box thinking I bring to the brainstorming table.

I’ve been thinking about dead regulars ever since I belatedly learned a documentary film crew had been here to determine whether the historic tavern is haunted or not. There were interviews, B-roll shots and assorted skullduggery.

Amazingly, all this took place without me. I have one of those massive egos that leads me to believe I should be consulted on all big issues.

Heck, I think I should be consulted on who’s allowed to drive motor vehicles and who’s not.

See, I think it would be good for business if we could convince people that, yes, the bar is haunted, haunted by the ghost of Arnold Palmer.

Talk about your friendly ghosts.

It’d be a very believable lie — my favorite kind!

It’s a somewhat quaint turn of phrase, but Palmer used to “haunt” The Tin when he was still alive. He was in here all the time. And the man could really light up a room.

For years there was a robust rumor going around that he was actually born in the building back when the upperfloors were apartments for various tenants, including, in fact, Palmer’s father, Deacon.

The rumor was so persistent, I one day felt compelled to ask Palmer about it.

“What do you think, we were pioneer folk?” he said, leaving the unsaid “jackass” hanging in the air. “I was born in a hospital just like you.”

And, alas, that was about the last thing me and multi-millionaire legend ever had in common.

Note: When I tried to convince one of the more stubborn-rumor spreaders of the fiction, he said, “Well, then he was conceived in The Tin.”

I told him we don’t have the technology to determine that one.

Today the 2nd floor is Flappers (a bar, the one Zack managed) and the 3rd is an after hours corn hole court and the shabby office of one oft-behind-on-the-rent tenant.

But think of the fun if Palmer’s ghost came back. The warped floors would provide a putting challenge as monumental as anything found at Augusta.

Really, we don’t even need to make up any stories. It’d be fine if we just told all our old Palmer stories from when he still had a pulse. He died Sept. 25, 2016.

Just because Palmer couldn’t live forever doesn’t mean our best Palmer stories can’t. People would come from all over to hear the stories and — cross your fingers — see his ghost (or some hoaky facsimile for themselves).

Still, I’m feeling an odd melancholy over the still-fresh deaths of our friends. Zack, Wayne and Dave all died in the last year or so. I miss them all.

I’d summon them if I could. I’d have them meet me right here for the Friday Happy Hour, but I’m fearful they’d all be pissed off at me for extricating their blessed souls from the Land of Milk and Honey and directing them to the place known for giving away canned Spam on games of chance.

It's Halloween and I’m just spookulating.