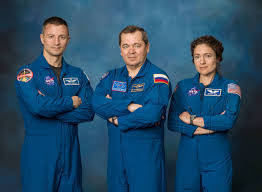 At times like these, the native optimist in me is at war with my inner doomsday realist, the one who senses an existential threat.

It looks like in order to keep the economy humming, many people are willing to risk the continuity of the species. I find the idea of a whimsically imposed  Easter deadline ludicrous, especially when our best experts predict by Easter our major cities will be seeing long lines of dead.

I used to trust in the Biblical balm of Matthew 5:3 that states “the meek shall inherit the Earth.”

It’s a lovely sentiment because it automatically seems to rule out obnoxious talk show hosts and their guests. But  the rise of social media reveals a more obvious flaw in the declaration.

There are no meek left! I know a few folks who can be described as demure, coy, and refined — and you’re all reading my blog. You’re sexy, too!

So who will inherit the earth?

Their names are Andrew Morgan, Oleg Skripochka and Jessica Meir.

Or as I call them Adam, Adam and Eve.

They are currently the only earthlings not on earth. Commercial flights (already infected) don’t count.

The trio have been manning the International Space Station since prior to the advent of the coronavirus.

It’s a stupendous failure of marketing that we know nothing about these highly accomplished individuals (all white) who appear so rigidly straight arrow the odds of them having ever told a fart joke, much less farted, are astronomical.

But for them what isn’t?

On paper at least, this is an impressive trio.

Morgan, 44, is a Morgantown native who now considers New Castle home. A West Point grad, he is an MD with a specialty in sports medicine. He’s served with the special forces and has four children.

Skripochka, 50, is a Russian cosmonaut and a recipient of the Hero of the Russian Federation. That may be impressive or it may be one of those fraudulent honors Putin gives away like candy. Trump maybe has a drawer full of ‘em.

One interesting fact about Skripochka. In 2010 — and this was all unofficial — he while on a spacewalk slipped from an unsecured tether and began drifting to certain annihilation in the great black yonder. Miraculously, he bounced off an antenna and was able to grasp a fortuitously positioned hand railing before drifting off to a grisly demise.

That brings us to Meir, 42, of Caribou, Maine, and to me the most impressive of the crew. Not only is she an astronaut, she’s a marine biologist, a physiologist and a Harvard professor of anesthesia. Her bio says she studied diving habits of emperor penguins in Antarctica and migratory patterns of bar-headed geese over the Himalayas.

One possible complication to her assuming the role of Eve v. 2.0.

She’s never been married. She’s, perhaps, a lesbian, which would be an inconvenience to say the least for any woman with a mortal duty to repopulate the planet.

More likely, she’s never found a man her equal. I don’t doubt it. I’ve sat next to men in bars nearly my whole life and if I had a choice between studying your typical male in a bar or, say, a bar-headed goose, I’d pick the bird.

Imagine the head start humanity will get with a gene pool seeded by these three achievers. You might be dismayed that Skripochka, a man who forgot to secure his own lifeline, is one-third of humanity’s future, but I hate to think of a future that didn’t include for purposes of levity some Three Stooges elements.

I doubt you’ll hear about it, but some ISS drama may soon take place.

Morgan, Skripochka and Meir are due to be replaced by a new (tainted) crew in just a few weeks.

What if they refuse to answer the door when the replacements knock?

That’s what I’d do. Yes, I’d  slide the little chain over the door, shut out the lights and just pretend no one was home.

In space, no one can hear you ring the doorbell.

Despite his recent troubles, I think any movie about space ought to have at least a little Spacey.

Earth’s plans to occupy Kepler 22b

Insanely hot ! Your book can really be the beginning of something...With a great cover and content, you just need more reviews to grab eyeballs and make more sales. Try usabookreviewers.com If I can interest you in a book trailer, let me know. I can do 1 for free !

And now for a comment from a real human, not a bot: You strike again with your wry wit.
So glad in this crazy time I can still read your posts. Stay well!

Hey, thanks! I appreciate the opinion of a true human, one with a whole lot of heart, Hang in there, Melissa!