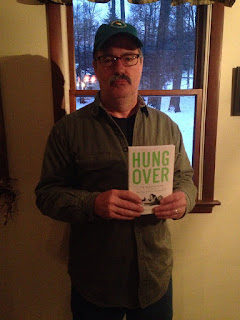 The greatest tribute anyone’s ever said about me is that just by telling my stories I once cured their hangover.

I mean, if you believe Scripture, that’s something even Jesus never did.

It was 2015 and I was the breakfast keynote speaker for the Pennsylvania Restaurant and Lodging Association. I was there to give my “Use All The Crayons!” talk.

I’ll let my Lazarus tell it (I to this day use this quote for promotional purposes):

“My restaurant hosted a lavish wine dinner the night before Chris’s keynote. Everyone there felt like dying. I didn’t even want to go. The topic sounded so stupid. Man, I’m so glad I did. Chris was so warm, so funny and so engaging he had me feeling better right away. It was a tough crowd, but he had us all feeling happy to be human. I swear, Chris cured my hangover!”

This man owns one of the finest and most established restaurants in Pittsburgh. And to show his gratitude, he invited me to a lavish dinner which I accepted without even a pause for prissy ethical considerations.

“And bring your wife!”

So my favorite part of this sumptuously memorable evening was watching Val’s bewildered reaction to this prominent man’s gushing on and on and on about me. She suspected it was all an elaborate put on.

I love her very much, but she’s the inspiration for the line: “Any man who thinks he’s his own worst critic is either delusional or single.”

I mention all this today because I’m in the middle of a terrific book by Shaughnessy Bishop-Stall. It’s “Hungover: The Morning After & One Man’s Quest for the Cure.”

His book is off to a roaring start and has the potential to become historic. I mean, even Jesus only raised one from the dead.

I’m a sucker for compelling quest books, stories of men and women striding confidently around the globe in search of fame, riches or adventure. That Shaughnessy conducts his in a mostly inebriated stumble only makes it more endearing.

It’s already the No. 1 bestseller in the Amazon substance abuse category, an indication to me that those who are categorizing books for amazon could use a belt or two. Because this is a substance appreciation book.

Shaughnessy and I became friends in ’13 when we met on an “Extreme Vegas” press junket of five of America’s premiere freelance writers and me.

See what I did there? That’s an example of me being self-deprecating, a trait I learned Shaughnessy appreciates.

I liked him immediately because I could tell he was fashioning a dandy book idea and was grounded enough to avoid it turning him into a colossal prick. And I admire anyone who can mange being grounded while simultaneously being high, as he is apt to be.

He mentions me on page 20 in a passage about how we were set to embark on an afternoon of Ferrari racing across the desert. Now, I ask you to brace yourself because parts of this will be disorienting to anyone who knows me even vaguely.

“‘You ever done this before?’ asks the writer (me) from Iowa—an old-school, avuncular journalist who’s self-published a finely crafted, nicely jokey self-help book available through his website on a pay-what-you-can basis. It’s called ‘Use All The Crayons!’ and has sold more copies than anything the rest of us have authored combined. He is as self-deprecating and inspiring as the New York travel writer is not.”

I’ve never been to Iowa, but now I’m wondering if I should move there to seize any potential promotional opportunities arising from the confusion.

Iowa? He knows I’m from Pennsylvania. Maybe he wanted to convey someone who’d appear more rube-like than us Keystone State sophisticates. Maybe he was up against a deadline and Iowa takes less time to spell than Pennsylvania.

If I could change one thing it would be using the word “avuncular,” meaning of or resembling an uncle. I’d opt, instead, for words like masculine, studly or buff — you know, words I use to describe myself during my near-hourly mirror pep talks.

Plus, in the acknowledgements page where he mentions, I think, about 1,000 people who’ve rendered him assistance, he lists me fifth. I’ve chosen to think the list was compiled in order of importance and can only hope it’s not in order of most avuncular.

But I couldn’t be happier for my friend. His book in just the last week has earned praise in the Wall St. Journal, The Washington Post and The New York Times. And he’s just getting started.

He’s a great guy who’s written a great book. A single father of a young son, I admire him for having achieved a proper balance between being responsible and being reckless and making it seem destined for grand and deserving success. And all it took was 10 years of devoted drinking.

And to think I squandered the equivalent time way out here in Iowa tending this godforsaken blog.

No wonder a guy like me earns mention in a book titled “Hungover.”

Vegas: Enjoying a good long jump with a Playboy Playmate