It's mourning again in America 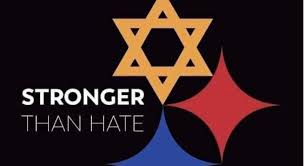 I was on the verge of posting something I thought was funny this weekend when I wondered about the tastefulness of trying to provoke laughter when so many of my Pittsburgh friends are bereft.

I asked my friend John. He advised me to wait until at least Tuesday before resuming any on-line silliness. “Any sooner than that,” he said, “and you risk looking like a callous jerk.”

I’d hate for even one person to consider me either — and I beg your pardon for appropriating the use of the word hate on a weekend when hate was so emphatically defined.

So in deference to the dead and grieving, I’ll not post any jokes until around noon Tuesday. But if proper mourning time were the issue none of us would ever laugh again.

Sadly, it seems like it’s always mourning in America.

I’ve been mourning hate-crime victims since as long as I’ve been alive.

My mourning for The Tree of Life slaughter won’t lap the evergreen mourning I feel for the nine murdered worshippers at the Emanuel African Methodist Episcopal Church in Charleston. A godforsaken white supremacist in 2015 murdered them right there in the pews.

And I’ve never seen a single white supremacist that made me, a fellow white, ever feel the least bit supreme.

I’ve been mourning the senseless death of Matthew Shepard for 20 years. Remember him? He was murdered in 1998 by two Wyoming hoodlums who hated him for being gay. His funeral was protested by aberrant church members for whom “God Hates Fags” held more scriptural relevance than “Love Thy Neighbor.”

Shepard was in the news this week. After 20 years without a final resting place, his mortal remains finally found a home in the National Cathedral in Washington DC. His parents said they rejected traditional burial in the hometown cemetery for fear it would attract homophobic vandals whose hatreds extend to beyond the grave.

It would be different if there was any rational evidence that hate crimes modified behavior. But the result of hate crimes always seems to be a strengthening of the identity of those who are victimized simply for being born themselves.

For instance, I’m unaware of any mass of homosexuals who decided to become less gay after the Matthew Shepard murder.

Elton John wrote “American Triangle,” an achingly poignant 2001 song about the murder, and in 2009 Shephard became a namesake inspiration for federal hate crime legislation, and gay marriage is now the law of the land.

The two men who killed him? Both were in their early 20s at the time of the murder and have been serving life without parole ever since.

I wonder what they hate about prison.

Certainly no hate crime has ever led people to become less Black or less Jewish.

Good-hearted and tolerant people will always rally around the persecuted. That’s what happened in Pittsburgh Sunday as 2,000 mourners gathered in the rain to show soulful solidarity.

Christianity didn’t really take off until after its leader was killed in a hate crime that resulted in the forgiveness of all the people who commit hate crimes.

You may have heard of him.

He was some Jew.

The prez, the killer & origins of ‘Amazing Grace’

The enduring power of our radioactive “n” word

Too much George Zimmerman commentary … Here’s mine!