When pull-my-finger is health care 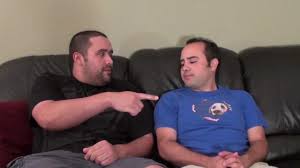 I’ve for years been asking people to pull my finger strictly for comedic purposes. For those of us of juvenile bents, it’s always uproarious.

The key is to time a really loud, monstrous fart to the finger tug, leading the innocent finger puller to conclude there’s an obvious cause and effect. It’s something my wife and daughters find utterly hilarious.

At least they once did.

But I never realized until Buck’s return the pull-my-finger request could fulfill therapeutic purposes.

Buck has since 1980 owned the Tin Lizzy and has thus been my office landlord since 2015.

He stops up here on the third floor at least once a day for philosophical banter and to, I guess, fulfill a daily need to say something disparaging about my shirt, my hair or what he perceives as my neglectful care for my office plant.

So when he told me he’d be gone for a month, I knew I’d miss him. He left in July for a month in Wyoming, a state where the fish outnumber humans by about 5,000-to-1.

I didn’t realize just how much I’d miss him until the doctor said my thyroid might be cancerous and needed to come out. They asked if I had any questions. I did.

Can this wait, I asked, until Buck gets back?

He owns the Tin Lizzy.

“You mean you’d delay potentially life-saving surgery to get the medical opinion of some guy who owns a bar?”

I wound up going with the professional’s advice. Not because I was more impressed with all his fancy pants degrees from la-de-dah medical schools but because I knew Buck was fishing and he might not return until Wyoming ran out of trout.

He’d read about the surgery on Facebook and being considerate asked how it went. I told him everything was fine, but I might never be able to sing like I used to.

“Then,” he declared, “the operation was a success.”

It was then I noticed the splint on the pinkie of his casting hand.

And let us in these divisive times take a moment to celebrate the pinkie, the unifying feature that no matter what our skin color — ebony, yellow, olive or white — is known to even Latin-spewing physicians as “the pinkie.”

All hail the pinkie! May you lead the way to a truly colorblind society!

Turns out my friend suffered a rare fishing injury. He’d slipped on some rocks and landed with all his weight on the dainty appendage. He’s still wincing from the pain.

“I thought I’d dislocated it and tried to pull it so it’d settle back in.”

That’s exactly what you’re supposed to do with a dislocated joint or digit. Give it a brisk yank and snap it back into the proper socket. Happens all the time on football fields. I remember once seeing Steeler great Jack Lambert awkwardly tackle an opposing ball carrier, shudder in pain and then approach the Steeler sideline.

The announcer said, “Oh, man, he just had a teammate pull his dislocated finger back into place and he’s returning to the huddle. There’s tough and then there’s Jack Lambert tough.”

And that there is the only time you’ll ever see championship football compared to trout fishing and Buck to Jack Lambert.

Still in terrific pain, he said he continued walking to meet his pals and encountering friendly on-stream strangers.

“I kept asking them to pull my finger,” he said. “A few of them looked at me like I was nuts, but pulled it anyway. I was already in a lot of pain and figured it couldn’t hurt any worse.”

He did find one really big guy who said he’d be happy to pull Buck’s finger and gave it a hell of a tug. It only increased the pain.

Turns out Buck’s self-diagnosis was all wrong. His pinkie wasn’t dislocated after all. It was badly fractured. Emergency room docs inserted scores of tiny pinkie pins.We can only speculate how much additional trauma all that unnecessary finger pulling caused.

He’s still in a lot of pain and is for purely medicinal reasons seeking an increase in his daily martini allotment.

Me, I’m belatedly relieved Buck wasn’t around to consult on my thyroid surgery.

Now anytime I hear mention of Wyoming, I’m likely to think it’s a state full of friendly men who are more than happy to pull a stranger’s finger.

And I’ll wonder how Wyoming women might react if a needy stranger came up complaining of a dislocated penis.

Of chicken fingers, breasts and nipples