RIP Prince & and which rock superstar will deserve resurrection 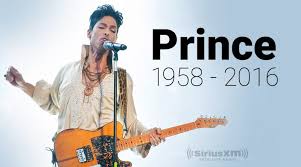 I’m convinced we’re nearing a day when our collective grieving over dead rockers will be so majestic God will respond by restoring in whole to us the deceased superstar.

I was surprised by the death of Prince.

I can’t say I was sad. It’s not like he died owing me money.

Die owing me $20 or more is a way to ensure I’ll show up at your funeral wailing over the loss, stopping only long enough to pester your widow/widower to square things.

With Prince, I was what I categorize as “an admirer, not a patron.” I’d never bought a single record, nor paid to see any Prince shows or movies.

But his greatness was apparent, never more so than when I saw in 2004 the Rock ’n’ Roll HOF clip of him soloing on “While My Guitar Gently Weeps.” It was during a George Harrison tribute with a band that featured Tom Petty, Jeff Lynne, Stevie Winwood and Harrison’s lithe son Dani, an exact ringer for his old man (my favorite Beatle, but only my fourth favorite Wilbury).

It’s incredible. Prince is joyfully showing off like he’s auditioning to be Petty’s lead guitarist.

My favorite part is watching Dani’s reaction. He’s playing rhythm guitar with an attitude I’d call workmanlike: no facial expressions. Then Prince comes on and Dani lights up.

This son of rock royalty is acts like he’s never seen anyone play guitar like that before. There’s a reason for that.

So Prince was a genius.

But was he popular?

You’d certainly think so from the weekend’s media reaction.

He did a great job at the 2007 Super Bowl, but in spite of all the grieving how many people saw a Prince show?

Mass popularity isn’t the surest indicator of true greatness — and to that this unheralded blogger says, “Whew!” — but it’s the only indicator we have of cultural relevance.

The answer is not many.

In the four decades of performing, he’s never once been one of the Top 20 grossing acts.

These lists include some unlikely candidates like Taylor Swift, New Kids on the Block, Britney Spears, Justin Bieber and, ah, Cher.

I’m merely wondering, gee, if this is how we’re going to grieve for Prince what will the reaction be like when Mick Jagger, Petty, Paul McCartney, Elton John, Roger Waters or, yes, even Jimmy Buffett succumbs to the inevitable.

Because all the great and beloved rockers — by every measure superstars — are in or near their 70s and will one day die.

It’s bound to happen to everyone.

Well, everyone but Keith Richards.

It’s going to happen to Ringo.

I wish no ill on anyone, but I admit to praying for the sake of our collective cool that Ringo doesn’t one day become the last surviving Beatle.

It’ll be big news, too, when Stones drummer Charlie Watts dies. Many fans will be bereft, memorials will be erected, tributes aired and many tears shed.

And he’s just the drummer!

Mick’s death will be monumental, as will McCartney’s.

In fact, it’s fair to look at all these deaths as warm-up acts.

When the classic rock superstars begin to fall, our grief escalation is going to soar up the charts.

That’s why I believe God will one day see our suffering is so great He’ll take action.

He’ll see humanity so absorbed in mourning His heart will be moved.

The clouds will part, a D-major chord will be struck and on the third day rock will be restored.

I say it’ll be Bruce Springsteen.

Really, if this many people are this beside themselves over the death of Prince, what’s it going to be like when Springsteen dies?

We will be unable to function. We will wallow in grief. The world will cease to spin.

God will be moved to act.

The only ones happier than his fans will be the greedy bastards who set golden circle prices at TicketMaster.

It’ll be neat, too, because he can call his first post-Lazarus album “The Rising (and this time it’s literal!).”

Springsteen will be most worthy of resurrection because he’s exceptional even among the greatest.  He cares about his fans, area foodbanks, up-and-coming artists and even who gets to use the public restrooms in North Carolina.

So get ready for the day when our mourning will really mean something.

I’m convinced we can together grieve so hysterically the Almighty will resurrect The Boss.

And he can bring Clarence back with him!

Baby, they’ll be born to re-run.

The Boss for God: an ’09 concert review

Petty wants me to buy vinyl & who’s better: him or Springsteen?