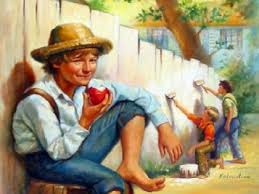 I was startled to find not one, but two ejaculations on the pages of “Tom Sawyer.”

And here I wasn’t even sure the 139-year-old Tom has been through puberty.

I wondered if perhaps I’d stumbled onto one of those pornographic parodies. Some of you more worldly types may have heard of those.

They’re where the smut merchants tweak a famous title and turn something wholesome into something filthy. Examples: “On Golden Blonde,” “Shaving Ryan’s Privates,” and “E.T.: The Extra-Testicle.”

But I soon realized I mistaken.

No one had tampered with the words of Mark Twain.

Time had tampered with their meanings.

It wasn’t that way when Twain wrote Tom.

The first instance is in Chapter 15, “Tom’s Stealthy Visit Home,” in which he’s hiding under Aunt Polly’s bed as she loudly laments her belief that Tom’s dead.

“He had to keep still long after she went to bed, for she kept making broken- hearted ejaculations from time to time …”

Ejaculations resume in Chapter 21, “Eloquence — And the Master’s Gilded Dome.”

“There was a buzz of gratification from time to time during the reading, accompanied by whispered ejaculations of ‘How Sweet!’ ‘How eloquent!’ ‘So true!’ etc…”

But it is indicative of how, well, fluid the language can be.

It’s that way with intercourse, another word that would today make modern Tom Sawyers snicker the way they do whenever the astronomy teacher mentions Uranus.

Intercourse used to be a proper Victorian word that meant two people engaged in polite conversation.

For instance: “Last week my wife had intercourse with the man who played Greg Brady in ‘The Brady Bunch.’”

Given the 19th century definition of the word, it’s perfectly true and within the marital restrictions set forth in our wedding vows.

It’s okay because, heck, I had intercourse with him, too!

It’s how Pennsylvania has a charming village named Intercourse. You can blame Sigmund Freud for the word’s perversion. He in scholarly works began to describe carnal intimacy as “sexual intercourse.”

So today my favorite unofficial state motto is: “Virginia Is For Lovers But Pennsylvania Has Intercourse!”

Hospitality is another example. We love hospitable people, hosts who treats guests with warmth and aplomb.

Care to guess the Latin root word of hospitable?

Yes, in 19th century England children slaving away in dreary work houses used to dream they’d get sent to the hospital because treatment there was so superior.

It was hospitality at its finest.

Today, nobody says, “Cabo’s booked. Why don’t we just head over to the hospital for a few days of R&R?”

Another example: Did you know the word computer is about 360 years older than the first computers?

It’s true. The first computers were people who made calculations; they’d compute.

Condescending used to be a word that described noble men and women who’d take the time to explain complicated issues to less educated souls.

Today, condescending to someone is faux pas — and I’d explain the definition of faux pas, but I wouldn’t want to risk coming off as too condescending.

Here are two from a read-worthy and related Collins Dictionary article:

Broadcast was initially an agricultural term that meant spreading seeds with a wide sweeping motion. It wasn’t until the 1920s that the term was applied to spreading the news.

We’ve all heard Teddy Roosevelt ejaculate the word “Bully!” Well, it used to be a term of endearment for do-gooder men and women. It wasn’t until the bullies began showing off their good deeds that bully began to morph into a word that meant intimidating.

I’m curious about where the word terrific will eventually settle. Of course, the root of the word is terror.

In fact, when T.R’s cousin, Franklin Delano died 70 years ago April 12, his last words were, “I have a terrific headache!”

It’s a sure thing FDR didn’t mean it the same way admiring film critics did when they wrote, “Michael Keaton is terrific in ‘Birdman!’”

So that’s it for today’s blog ejaculation. Thanks, babe, for the bully intercourse.

I hope you’ll check in tomorrow.

I promise you and I will have a gay old time!

Happy 50th Birthday to these words (including 2 whopper profanities)!

Word quest: My own personal zeitgust