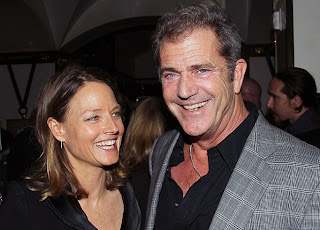 (745 words)
My wife and I were catching up on the season one finale of “Homeland,” a show that features Claire Danes playing a confused blonde, when our daughter walked in causing us to hastily flip to a show featuring another seemingly confused blonde.

It was Jodie Foster accepting her lifetime achievement award at the Golden Globes.

That’s when I became confused.

How do you give a Lifetime Achievement award to someone who’s lived, let’s hope, only half her life?

Foster’s 50. I guess since she’s been performing since she was 3 that her career qualifies as a lifetime. But what kind of award do you give her when she turns 80? An Afterlife Time achievement award?

Viewers and pundits are still dissecting her odd ramble. Parts of it made her seem assured. Other parts bizarre. She seemed at one point to indicate she was bidding show biz adieu and at another she was going to trumpet her sexuality.

She stood center stage at one of the world’s most prominent awards shows and issued an earnest plea for privacy.

It was disconcerting to see someone so poised playing screen roles behaving so jittery appearing as herself.

And then sitting there looking ravaged by time and five years of unrelenting criticism was Mel Gibson, last seen working a furry hand puppet in the 2011 Foster-directed bomb, “The Beaver.” His darkness seemed pervasive enough to consume all the light in a room full of stars.

Loyalty and the capacity to forgive are admirable qualities, but hailing the reprehensible Gibson as a really swell guy at a posh industry awards show seemed more antagonistic than redemptive.

Then there was this: Why Foster?

Her batting average is terrible.

For every “Taxi Driver,” there’ve been a “Nell” and a “Contact,” respectable and critically acclaimed movies, but nothing of enduring stature.

The lovely Anne Hathaway, 30, has had more compelling hits.

This is true. I was a young newspaper reporter for the local newspaper in 1991 when Foster was in the area filming “The Silence of the Lambs.”

Someone involved in production asked if I wanted to be an extra. Of course, I did.

They did about a dozen takes of me and about 10 other people walking through the local airport terminal with Foster marching behind me in the mix. I remember trying to appear grave.

I guess I was even less of an actor than I was a businessman because when we went to see the premiere they’d cut my 5-second scene. How cruel.

But it was an interesting day because I got to watch Jodie Foster -- already an Oscar winner for her role in the 1988 film, “The Accused” -- eat lunch. The little regional airport had an Italian restaurant where the cast and crew gathered for noon victuals.

My observations revealed she’s dainty, as you might expect. She ordered her salad dressing -- it was French -- on the side so she could control consumption.

And she doesn’t like being interrupted when she eats.

This became apparent when the restaurant owner, a bombastic Italian gent, came over and asked if he could have his picture taken with her. He was going to put it up on the wall that featured glossy photos of him alongside luminaries like Ronald Reagan, Frank Sinatra and Arnold Palmer.

She politely, but insistently with her fork hovering in mid-air told him no and that she wished to be left alone.

The old man was outraged. It was an enormous snub. He literally had to be dragged away from a table in his own restaurant sputtering his indignations.

Who, he kept asking, does she think she is?

I’d see that old man every once in a while over the next few years before he died and I’d always ask, just to get him going, that same question over and over.

Who does that Jodie Foster think she is?

Funny, more than 20 years later I’m not sure she even knows.

• Let’s all America go to the movies
Posted by Chris Rodell at 11:41 AM