Blinded by the (head)lights: a glaring story 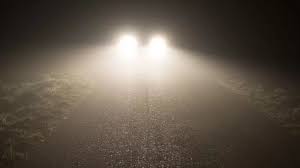 I’ve said it before, but I’m such a pacifist the only thing I reflexively want to kill is time.

This puts me at odds with everyone but, gee, I guess the Dalai Lama and Kermit the Frog.

But the other night I heard some cranky old white male talking about blasting a fellow motorist and I thought, yeah, I’m on board with that.

He indicated his victim would go unmourned and that he, this vehicular vigilante, would be hailed a hero.

I have to say, I saw the light.

And now I can’t see anything else!

Bruce Springsteen was metaphorically “Blinded by The Light” in ’73. I’m blinded every time I leave my driveway in the dark.

It seems our headlights have gone wild.

Yes, on top of all our other boiling hostilities, I sense a new front is emerging in the multi-pronged Civil War some seem so eager tp fight. This one is between high-beam blasting souped-up headlight jerk offs versus courteous in-obtrusive motorists like me

If anecdotal motorist complaints are any indication, there’s an epidemic of blinding headlights and selfish on-coming motorists who never dim their high beams, the better perhaps to see you go airborne missing a turn and wrapping your car around a utility pole.

My cranky friend says he wants to rig a rear-facing LED light and switch it on anytime he’s being high-beamed or tailgated.

Are headlights getting brighter?

Well, I believe my own eyes and at night they’re in a constant squint. Looking for terrain and road contour clues while faceing on-coming traffic is like staring staight into the sun.

Headlights have been getting cosmetically worse ever since the 2006 premier of the Pixar animated “Cars” movie where all the vehicles were made to appear human. This was especially evident through the headlights. The turn signals were even eyebrows.

And, of course, life imitated crass art and today many new cars at night appear to be monsters on a roll to gobble up the pavement.

While we’re on the subject of movies, my jiffy Oscar thoughts on some we saw: We loved “Jo Jo Rabbit” and “1917” (wife and daughter saw it … w/o me!); my favorite of the year was “Knives Out.” I haven’t seen “Parasite” and am reluctant to because I hated “Snowpiercer,” also by lauded director Boon Joon-Ho — and he has the best name to appear on film since Dash Riprock.

And, sorry, I hated the self-indulgent “Irishman,” and consider it more evidence that picture-by-picture Robert DeNiro is becoming our most over-rated actor. Want to see an under-appreciated DeNiro gem with crackling dialogue? Check out “Midnight Run,” the great 1988 road/buddy movie co-starring (Pittsburgher!) Charles Grodin.

I hear “Ford vs. Ferrari” is great and that brings us back full circle to cars, likely with the blinker on and the whole time hogging the passing lane.

I did a little digging on the glare problem and the future is, well, less blinding.

Popular Science reports all new vehicles will soon be equipped with so-called “adaptive driving beam tech.” It uses sensors at the front of the vehicle to detect where other vehicles are, and dynamically dims headlights to avoid glaring those vehicles.  Experts say the win-win result is other drivers won’t be blinded, but the road will be brighter.

The technology is already in use in Europe.

It’s maybe the only time in the history of illumination when dimming is a bright idea.

We shall close today’s rant with a Bible lesson from Genesis 1:3 declares, “Let there be light.”

Given the glaring troubles of driving in the dark, I don’t feel sacrilegious making the last sentence in this blog …

Lying about my DMV license foto