Fred Rogers: The kind of weirdo we should all aspire to be 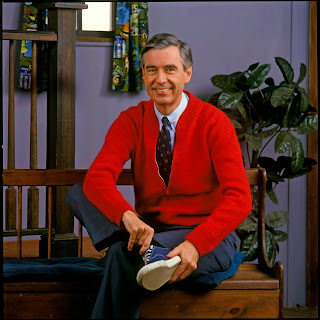 There are a lot of crazy rumors about Mr. Rogers. He was a Navy Seal. An Army sniper. A garishly tattooed killer. He was none of those things.

What was Fred Rogers? Let me tell you …

Fred Rogers was a real weirdo. That is he was the kind of person whose behaviors were at odds with the rest of us normal folks. He was that kind of kind.

He wasn’t the first. Notable weirdos include Jesus Christ, Mother Teresa, John Lennon and Yoda. Oh, and most canines are weirdos, too. Like Fred, most every dog reflexively likes everyone he or she meets without first googling their name to determine status or means.

So he wasn’t the first weirdo, but these days it seems fair to wonder if he was maybe the last. Who besides Fred, who died in 2003, seems capable of making kindness contagious?

Kindness, civility, compromise — these are all dismissed as prissy attributes, weakness, by leaders proud to boast their familiarity with bellicose quotes from Sun Tzu’s “The Art of War.”

The third way? I forget, but it’s a safe bet it has more to do with kindness than killing.

An ordained Presbyterian minister, Rogers presided over just a handful of wedding ceremonies. One of them was for a Pittsburgh woman who was a show set designer; Mister Rogers was her boss and she used a deifying adjective to describe him. She was recalling describing the pre-wedding tumult when she locked everyone out of the room and was seriously thinking of bailing.

Then Fred knocked on the door. She let him in. “He started fixing my hair and telling me how this was meant to be. All my stress began to melt away. Truly, he was just so Christ-like.”

Ever work for a boss you’d describe as Christ-like? Do you know any aunt or uncle worthy of the description? How about clergy? Any popes fit the bill?

How about you? Ever done anything Christ-like?

Those are some big shoes to fill.

How about this? When was the last time you did something that could be described as Fred-like? Seems less daunting, doesn’t it?

In an era where we’re apt to like only the likable and the like-minded, he was going to — damn the torpedoes! — like you if you liked it or not.

I’m friends with a guy who woke up feeling entitled to surliness. An invasive doctor appointment awaited. Traffic sucked. The weather was bitter. Who wouldn’t be in a sour state given those circumstances?

I can think of one guy.

“I was the world’s angriest and most unhappy man,” my friend said, “and the last person you want to see when you’re feeling like that is the world’s kindest man. But that was my fate. I ended up bumping into Fred Rogers.”

Unbeknownst to either, they’d simultaneously parked about a block from the same doctor’s office where each was being treated.

Maybe he could sense my friend was in a bad mood because Fred proceeded to do everything to bring some sunshine to cheer up this sour stranger. He was polite, cheerful, conversational, encouraging — silly even.

It was all very suspicious behavior.

“He kept making eye contact in the waiting room. I’d look up from my magazine and he’d be looking right at me. He’d say, ‘Hello!’ Happened 3 or 4 times. He was so relentlessly cheerful it felt like I was being punked. If it had been anybody but Mister Rogers it would have been really, really weird.”

And it worked. He said, “He cheered me up. I’m living proof it’s impossible to be angry about anything after talking to Fred Rogers.”

The pity is that most of us would have stoically ignored or been alarmed even had it been anyone but Fred Rogers.

Ask yourself: Who’s the weirdo: The guy who recognizes a pained soul and works to heal it, or the one who refuses the therapy?

It’s a mindset we must overcome.