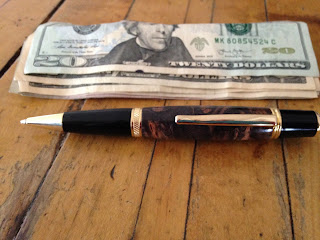 The clandestine meeting had been set for a public place. Consummation would take place out in the open, but among indifferent strangers.

This tete-a-tete had wholesome origins. My attractions bloomed at the Ligonier Farmer’s Market in early summer in the season of the rising sap.

Of course, I couldn’t let my wife know. I suspected she’d be very upset.

Turns out I was right.

Because in spite of all my painstaking deceptions, guess who also happened to be there at the Barnes & Noble café. It was Val

I was busted. Exposed. Caught with my proverbial pants down.

The sap had risen and the sap was I.

“It’s not what you think,” I feebly mumbled.

Oh, but it was. The evidence was spread out all over the table.

No, more than a dozen or lovely little Duckys.

The object of my secret desire was not a wayward woman, but a refined, eye-catching luxury pen handcrafted by Dave “Ducky” Owen.

Another long string of my consumer deprivation appears to be drawing to a close. Interest in the new Fred Rogers book is high, sales brisk. So for now I’m flush. Still deep in debt from years and years of bone-headed decisions, but feeling the warm winds of momentary prosperity on my face.

And what’s the first thing you do when you have money burning a hole in your pants?

Then you splurge a bit.

It’s indicative of my station that my idea of a splurge isn’t a Ferrari, a Rolex or first class tickets to some place exotic.

But each of those penny pens fulfills the same mission as the ballyhooed Aurora Diamante Fountain Pen, the world’s most expensive writing instrument. The pen is festooned with 30 carats of genuine De Beer's diamonds on a solid platinum barrel.

Out of my league. But that doesn’t mean I can aspire to upgrades.

I became a nice pen guy last year when I was enjoying some success with the Palmer book. A stranger had bought 30 copies to give to friends and stood there and watched me sign.

“I hope I’m not being rude,” he said, “but a great writer like you should be using a great writing instrument,” he said as I blushed at the heady compliment. From his shirt pocket, he pulled out a Cross Century Classic he said cost $130.

But his appeal to my fancy vanity took seed. I vowed when I reached a certain threshold I’d shop the Cross website for classy pens still affordable to a classless guy like me.

And I didn’t tell Val.

Wrong, I know. Spouses all tend secrets in order to avoid needlessly roiling matrimonial seas. Live down and desperate so long any item that’s perceived as extravagance can inflame ire, especially if it’s attained on the sneak.

And, geez, it wasn’t like I was concealing a ruinous coke habit (give it time).

Cross, by the way, produces a “Liberty Unlimited” line made from melted-down metals that include steel from illegal guns confiscated by the police: “Its purchase helps protect and educate kids who are growing up with gun violence.”

Anyway, my heart kindled a spark when I saw Owen peddling his pens, made right up the street in Greensburg. They’re magnificent. Plus, there’s a strong appeal to supporting the local guy, an instinct I’ll revisit in a few paragraphs. So, I decided to buy one to commemorate the release of the new book.

And I got busted.

The pens were all over the table, price tags plainly visible (mine was $65). I felt bad. I’d disappointed her. Again.

But I love that pen. It’s just beautiful, worthy of a great writer — or at least of a writer who’s been told he’s great.

Now, I want you to pay for it.

If you like the blog, I ask you check out the new PayPal widget on the sidebar. Supporting the blog — through donations or book purchases -- has never been easier.

That way I can say with belated honesty the pen was a gift from benevolent blog readers out to express their gratitude.

In this case, it’s the write thing to do.

Pens vs. Sharks for Stanley Cup

My new signature … it’s legible!
Posted by Chris Rodell at 11:39 AM