Ways to improve commercial flights & why I love trains 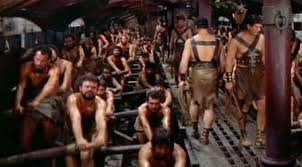 Of all the cheap suggestions I’ve offered to improve commercial air travel — hold hands with seatmates, pipe in polka music, designate at least one passenger to dress like a nun — only one stands out for being both controversial and prophetic.

It’s the one where I suggest we convert airplanes into slave ships.

Understand, I’m not talking about the historically murderous slave ships that brought chained African-Americans to our Southern shores, although comparable manifest diagrams show leg room to be strikingly similar with modern passenger jets.

I’m talking about the galley slave ships depicted in “Ben-Hur,” the 1959 blockbuster starring Charlton Heston as an AD 26 Jewish prince who is betrayed by a Roman friend and sold into slavery.

His fates lead him to the an aisle seat on a navy trireme where he and about 70 other sweaty men are ordered to rhythmically row to the beat of a slave drummer.

I think this would appeal to modern fitness fanatics, many of whom who slavishly self-torture each morning at home and on the road with pricey basement rowing machines of their very own.

Wings could be retro-fitted so they “flap” like birds when the rowers begin to pull. So there’s a strong passenger incentive to keep rowing with unflagging vigor in order for the plane to remain airborne for the entire flight. Exorbitant fuel costs would vanish.

Any passenger not pulling his or her weight would be subjected to brutal beatings like the kind you see in “Ben-Hur” or, I guess, United’s coach class.

I’m one of those guys who is more likely to be dragged onto a flight than dragged off one. I hate to fly.

It makes me spiritual soulmates with the late, great Southern humorist Lewis Grizzard, who I was fortunate enough to interview multiple times when I was a reporter at the Nashville Banner, which carried his popular column.

He once told me he was a member of a National No-Fly Club. Their motto?

My fly or drive threshold is now about 12 hours. That means I’d prefer driving to say, Nashville than flying there.

We just drove eight hours one-way to Charlotte and back for my nephew’s wedding. That’s 16-hours of family togetherness in a cramped car.

How bad was it?

It wasn’t at all bad. In fact, it was a joy. We stopped for nice meals in out-of-the-way places, played agreeably happy music and games and just reveled in being together.

The only thing better than a long car ride is a longer train ride.

“I’ve ridden everything with legs or wheels and nothing beats the train.”

That’s a quote from another old friend, the late, great John Clouse (and you can tell I’m getting too old when I keep ascribing “late, great” to deceased acquaintances). He was in the Guinness Book of World’s Records for being the world’s most traveled man.

I used to travel to New York to meet with magazine editors two or three times a year. I always took the sometimes unreliable train. I loved every time, even when it was late.

I’ll never forget the fall day when it was eight hours late.

It was back before cell phones and it wasn’t unusual back in the ‘90s for Amtrak to be an hour or so late. Train passengers took it in stride.

The train was supposed to depart Latrobe at 8:45 a.m. I’d call Amtrak every hour or so on the pay phone and was told, sorry, it should be there any minute. Better not leave.

What could I do?

I love trains, but I was seething at the incompetence, eager to vent.

So at about 4 p.m., I hear the whistle’s moan and see the glare of the locomotive’s headlight rounding a distant bend.

I assumed my most aggravated persona and climbed on board expecting passenger uproar.

In fact, there was none. No fury. No outrage. No bellicosity.

I asked a seat mate, what gives?

“Oh,” he said, when everyone gets on their real angry but it is Amtrak and, hey, they’re giving away free chicken up front!”

One: there will never be a news story about something described as “train rage.”

And, two: Colonel Sanders sure makes a damn tasty bird.

So I urge you to consider taking the train anytime you can.

Even when it’s late, it’s great.

Why I always prefer trains

In India, trains share tracks with elephants (includes my only Cosby reference

Let kids land all the planes

Planes should have horns to honk