An electrifying story on lightning 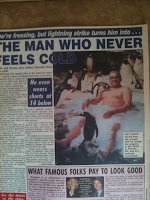 I’ve begun inflicting an evil little nursery rhyme on my daughters every time the skies begin to darken.

If you hear it, clear it

If you see it, flee it

It’s one of those annoying little ear worms that once it’s burrowed its way into your brain, it’s impossible to shake loose.

I learned it about 12 years ago when I was in the midst of becoming America’s foremost lightning reporter.

This is factual. At one time, I’d written major feature stories on lightning for four different national magazines.

It became my niche -- and my niches have always been nichey enough to ensure my professional poverty. It all began when I read a story about Harold Deal, a man who in 1969 was struck by lightning and never felt cold again. His vanity license plates read “NO COAT.”

The lightning strike so sizzled his skin he’d spend days lounging in ice-filled bathtubs in the hopes of finding elusive comfort.

I was doing human oddity stories for National Enquirer at the time. I called Deal and explained I wanted to do a serious story about his inexplicable condition.

Aware of the tabloid’s notorious reputation, he was resistant. He agreed to cooperate only after I gave him my solemn word the story would not poke fun of him or his condition.

So it was awkward when I called him back and said the photo editor asked if he’d agree to pose for pictures in the Orlando SeaWorld penguin hutch covered in ice and flightless water foul.

Can’t believe I still have the clip. My lead: “Hell will freeze over before Harold Deal does!”

It was through Deal I learned there was an annual convention of lightning strike survivors then held in Pigeon Forge, Tennessee, a gathering of the Smoked in the Smokies.

I learned that the No. 2 killer of lightning strike victims is suicide.

A single lick of 53,000-degree lightning can fill your frame with 100 million volts of soul-searing electricity, 45,000 times more than the eye-for-an-eye minded state of Florida lets loose when it pulls the jitter switch on Death Row bad guys.

It can leave you incontinent, off balance, forgetful, prone to seizures/violence/fits of crying. It can screw you up in ways that make you wish you were dead. And all the best doctors will examine you for months and say, gee, sorry, all the tests say you’re normal. Nothing we can do.

It can strike you through windows and snake its way through your electrical outlets and pipes into your showers. One survivor told the story of how he was struck laying in snug bed when lightning came through the walls and automatically turned his electric blanket up to a solar setting.

So I’m terrified of lightning.

That’s why what I’m about to say next will strike many as odd.

I intend to die by lightning strike.

I’m vicarious about how people check out. Is that the way I want to go?

I certainly don’t want to die in hospital or of old age and would like to orchestrate my demise at a time that’s convenient for me, like maybe at the conclusion of the Seinfeld “Junior Mint” episode.

But conventional suicide is an often messy embarrassment to the survivors.

I’m always fascinated by the somewhat recent phenomenon popularly known as suicide by cop. It’s where forlorn men commit a crime and wave a gun around at the police until lethal ventilation ensues.

But I wouldn’t want a good cop to feel remorse at having to shoot me, or a bad cop to feel elation over a justifiable kill.

So it began to dawn on me getting killed by lightning would be going out in a true blaze of glory. Call it a brainstorm.

I could take steps to ensure it happens while I’m golfing, a pastime where I’ve many times hit shots so poorly I’d wished I was dead anyway.

That’ll be me standing atop an aluminum ladder waving a 4 iron at the heavens and shouting, “Hail, Zeus!”

My death, I’m sure, will leave my survivors with one last great story to tell.

Yes, it sounds contradictory, but dying from lightning strike would for me seem perfectly cool.

If all goes well, I plan on executing my execution in the year 2048 when I’m 85 and begin running low on fresh blog topics.

Sounds like as good a way to go as any, and I'm glad there are still plenty more Eight Days to Amish blog posts planned before the big zap.

I did research on lightning strike survivors when writing my novel STRUCK. Wish I had known of you and your niche back then.

I tried finding the old story and couldn't. The big one ran in Details. I almost posted a lot of "cool" lightning facts, but they probably already familiar to you.