Trump ought to concede & move to Latrobe 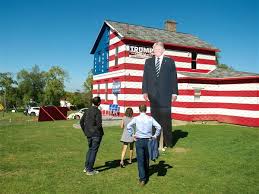 I’m one of the 80 million or so Americans who thinks every time Trump leaves the White House he steals a towel or two.

Of course, now there is a sizable portion of the Republican Party who think the Democrats stole something more significant than laundry.

This stubborn — and dangerous — refusal to accept the results has surprised many partisans.

Why would so many people who don’t believe in simple science feel any less suspicious about basic math?

So today commentators are buzzing with speculation about if he’ll leave the White House.

Of course, he’ll leave. The real question is where will he go to plot his next move, mostly likely one that’ll set the table for a run in ’24. Top-of-the-head prediction: He’ll dump Pence and run with someone else named Trump. Which one? Junior? Ivanka? Melania?

I cannot say. The crystal has gone cloudy.

But he’s bound to jettison Pence. I mean, how much of that punk’s mouthy sass is he expected to take?

Dumping Pence would be good for me because it would give me more time to convince our conspiracy-minded friends that his real name isn’t Pence, it’s Pants, a name he changed to conceal his lascivious nature. For example: “Mike pants whenever he sees Mother in her slippers and bathrobe.”

Many are stating the obvious, that Trump’ll go back to sunny Florida and the posh splendors of Mar-a-lago.

That’s a bad idea because it means sooner or later there’s bound to be a repulsive picture of him without his shirt on and I don’t know how much more the country can take.

Then there’s the overseas option. Some are saying he might seek asylum from prosecution in a foreign country. This intrigues because it’s bound to involve a goofy reality TV show. Personally, I’d skip the Super Bowl to watch him and North Korean despot Kim Jong Un play loser-buys-dinner ping pong.

But I don’t see him fleeing. He’s spoiling for a fight and, besides, he’s going to be issuing so many crafty self-pardons he’ll have license to grab Nancy Pelosi by the hoohah and all she’ll be permitted by law to do is say, “Thank you, Sir! May I have another!”

No, the politically savvy move is to get out among the people. He needs to cement his populist bona fides by living among regular folks who do things like, well, pour cement.

And strategically, he ought to do it in an Electoral College vote-rich battleground state like, say, Pennsylvania.

But he’ll be leaving 1600 Pennsylvania Avenue, an address befitting his privilege and ego. What could match that?

From his White House bedroom he can arise and see stirring flag-draped views of the Washington Monument, the Lincoln Memorial and other hallmarks of freedom — that is assuming he isn’t instantly mesmerized by the Fox & Friends wall-to-wall gush about his overnight tweets.

What about the latter address?

From there Trump could gaze out the window and bask in a view of … Himself!

By now locals know I’m talking about Trump  moving into Trump House. Painted to resemble an American flag, the two-story for-now unoccupied residence has been a genuine tourist attraction, drawing as many as 1,000 Trump fanatics a day. They come to share their love of all things Trump and pose for pictures with a 20-foot replica Trump.

And he’d love Latrobe, one of the reddest dots on the map. Really, the only opposition he’d encounter here would come from me, my wife and maybe one or two of our foul-smelling hippies.

We have scenic Laurel Mountain vistas, quality schools for Barron, and not one, but two McDonald’s — one of which is capable if producing the correct order.

On the first try!

And we have Latrobe Country Club. I recall reading somewhere that Trump plays a little golf. Arnold Palmer was born here — and, really, never left.

Of course, the best reason to have Trump move here involves another native son. That’d be the Rev. Fred Rogers.

He’s the polar opposite of Trump in every way.

“But Trump tells it like it is!” supporters say.

Honesty without tact is like brain surgery without anesthesia; the operation can cure, but the complications can kill.

It seems so quaint, doesn’t it? Like something the bullies would mock.

So be it. I remain steadfast in my belief that the rhetoric of Rogers will outlast the ALL CAPS tirades of Trump.

Because Fred stood for decency, fairness and civility. You know, like America used to!

Fred’d object to anyone who felt entitled to grab anyone else by the Henrietta Pussycat.

So, Donald, won’t you be my neighbor?

Because I’d sure prefer that to you being my president.