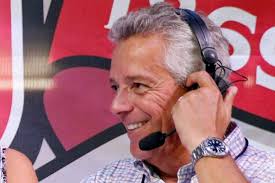 I’ve made the decision to use the currently inflammatory word “faggot” without coy deceptions — not because Cincinnati broadcaster Thom Brennamen got into trouble for using it.

Because Winston Churchill did not.

Brennaman is losing lucrative gigs left and right for saying into a hot mic that Kansas City was one of the “fag capitals of the world.”

Silly me. I always dreamed of going to KC for barbecue.

I know I’m diminished by the admission, but the instant I heard his name, my first thought was, “Faggot.”

See, I knew Thom. We tended bar together at The Nickelodeon, the most popular bar in Athens, Ohio, where we both attended Ohio University from 1981-85.

To me he was never just Thom. No was, he “that fag Thom,” or in reference to his fraternity, “Thom the Beta fag.” It was all very juvenile, although I do recall once seeing on a bar chalk board the clever “Thom is ghay.”

If you judged by my friends declarations, the gay population in Athens back in the ’80’s was pushing 60 percent.”

The social world wasn’t so much black or white as it was cool or gay. Everything was one or the other.

Tom Petty was cool (and not just because he spelled Tom without the superfluous “h”). Duran Duran? Gay Gay.

Was Cincinnati gay? It was The Queen City, wasn’t it? The Reds were gay so their famous announcer, Marty Brennaman, had to be. We figured he must have been on some sort of gay sabbatical when he fathered Thom.

What was pure cool? Me and my buddies.

About six of us worked at The Nick. Looking back, it was the best job I ever had. We were like kings, deciding who did and did not get served. We picked the tunes, made good tips, drank for free and exhibited a carefree kind of camaraderie that the girls found irresistible.

Well, irresistible at least to the girls who weren’t gay.

Thom was part of this happy mix. What strikes me most in hindsight is how little an impression this soon-to-be-famous man made.

We never shared a laugh, engaged a prank or fought over a chick (can I even say “chick” anymore?).

It was like he believed this really cool job with all these really great guys was just a tedious way station towards a future assured to be filled with lucrative network gigs at high-profile events, free golf, lusty babes, etc..

And he was prophetic. That’s exactly how it happened

Sure, his duties would take him to the occasional fag capital, but as long as he didn’t announce the now toxic-pejorative, he needn’t worry. Why would he?

So I say all this and now I surprise myself by saying the dominant emotion I’m now feeling isn’t glee.

Sure, he was a lousy bartender, a surprisingly colorless co-worker for a man who’d go on to broadcast color sportscasts to millions.

I do not believe he should be burned at the stake — especially when no less a grand wordsmith than Winston Churchill wrote about stake-burnings fueled by pyramids of faggots.

“High upon the pyramid of faggots the flames rose toward her and the smoke of doom wreathed and curled.”

Thus in just 64 years the term “pyramid of faggots,” has gone from a description of a bundle of sticks to something that conjures, I guess, a nimble troupe of homosexual acrobats.

Who knows what faggot will mean in 2080?

My point is I don’t think guys like me and Thom were prejudice. We didn’t mean anything by it.

So go ahead and describe us both with an anatomical word whose meaning even time stands powerless to alter.