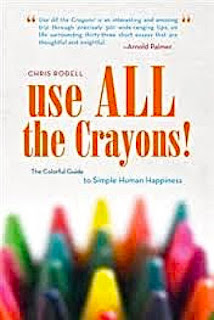 I’m not suggesting it will play a role in toppling international currency markets, but one of my books was a key factor in a six-figure transaction that required a notary and five responsible witnesses.

Sure, the necessary inclusion of a decimal point knocks the transaction into modest four figures and, yeah, one of the “responsible witnesses” was a distracted toddler and one of them was, well, me.

But I was sober and alert, enough so that I made one of the craftier deals of my life.

I bought a car with a book.

And, no, it wasn’t one of those little Matchbox numbers.

Of course I needed to supplement one crayon-signed  “Use All The Crayons!” with a tidy stack of dough (color: “cash green”), but that pesky detail will soon be dismissed.

A reputable car dealer defrayed a not insignificant chunk of change for my book.

If someone had told me 35 years ago that buying a 10-year-old used car with nearly 100,000 miles on it would make me this happy, I’d have said, “Which way to law school?”

But that is my lot.

My other “lot” will from now on be Superior Motors on Rt. 30 across from the Arnold Palmer airport. They were the best.

Understand, I’m not at all a car guy. In fact, when I’m seated with car guys and they start talking about cars, I mitigate the boredom by thinking about girls I’ve known who liked to kiss.

It’s a coping mechanism I’ve used since puberty and one of the reasons I got through school with C averages and why at the age of 57 shopping for $5,000 used cars qualify for me as high finance.

But I a car guy buddy, aware of my meager means and needs, said, “What you need is a Ford Focus,” he said. “They’re practically bullet proof.”

I didn’t ask what that meant, but in America today buying anything described as bullet proof seems like a sensible purchase,  like Eskimos paying for parkas.

Still, I was dreading the day, as dread I do anything that involves me giving what for me is a large pile of money to strangers for something I can’t eat or drink.

But salesman Tom couldn’t have been nicer — and when I told him my name he knew me.

Thanks to so much friendly local media coverage, it’s becoming clear I’m in the midst of warm and rising recognition. It happened later that day at Barnes & Noble where I’d been summoned to sign another stack of new books.

The staff were all solicitous and complimentary. I’m even getting recognized by readers who’ve seen me at readings or on TV. They all want to know when my next book’ll be out.

It’s the kind of reaction I dreamed I’d get seven years ago when “Crayons!” came out. I remain exuberantly proud of that book because all the people who tell me it makes them happy.

It’s not uncommon for me to gift one to strangers who’ve done me a friendly or two.

What is uncommon — unprecedented — is for me to use it as an audacious bargaining chip in a major purchase. But that’s just what I did at Superior Motors.

It was the best car purchase I’ve ever made. Superior Motors is staffed by superior people.

Now, if only that book will begin to fulfill its promise and lead me to a security that for so long has been evasive, well, it won’t be valued at $150.

Wrecked my car, ripped my shirt; life lessons from a bad day

“Use All The Crayons!” at Barnes & Noble

Email ThisBlogThis!Share to TwitterShare to FacebookShare to Pinterest
Labels: "Use All The Crayons!" Chris Rodell, Superior Motors, used cars