How TV disappoints in ways books never do 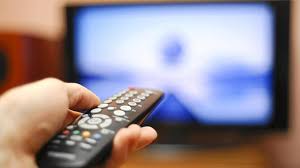 Both are simple devices.You should be able to turn one on by pushing a single button, the other with a flirtatious wink, a playful touch or by maybe offering it a warm donut.

The only time a TV should be difficult to turn on is when the remote is tucked beneath a cushion.

I’ve done it successfully maybe a million times. Understand, I don’t feel a wave of relief when I’ve turned it on and found my channel. I don’t do a celebratory dance or spike the remote. I just sit back in my recliner and commence to do my patriotic duty as an American and begin watching my 14-hours of daily television.

But now turning on the TV is beginning to make me feel anxious, like when someone asks me to do math without a calculator.

Val, like all of you, is on a restless quest to reduce the cost of our most annoying monthly gouge, that being the TV/internet bill.  So she did all the research, shopped, haggled and secured the necessary hardware. We’d enjoy more options and pay less; a true win-win.

That was the easy part. The hard part was teaching it all to someone who rages against complicating additions to our already cluttered lives.

“This remote turns on the TV,” she began. “This one turns on the Roku. Once this screen pops up, you can toggle over to the home screen where you can choose from …”

At the mention of the word toggle, the room began to spin. I wasn’t an undercover operative programming an IED to obliterate an enemy combatant. I just an easily amused guy who still enjoys watching the same “Seinfeld” reruns he’s already seen about 192 times.

I looked over on the end table and made eye contact with the book I’m reading. It’s the 1,152-page “Churchill: Walking With Destiny,” by Andrew Roberts. I telepathically tell it, “I’m sorry!”

“I apologize for again straying. You’re so beautiful, so uncomplicated. You don’t cause stress. You relieve it. Yet, I continue to turn to that trashy whore who costs me a fortune. Can you forgive me?”

I expect it to answer in Churchill’s voice, but my mind is so saturated with TV dominance the voice I hear is Gilbert Gottfried’s from when he was doing the Aflac duck commercials: “You’re fine! Books harbor no petty jealousies. Life moves too fast … so do the benefits of Aflac!”

They say we’re supposed to be in a golden age of TV viewing, but every time I watch something hailed as “great” I think, well, that was fun, but in six months I won’t remember who was in it or what they did.

Some of the recent shows we’ve truly enjoyed include, “Ozark,” “Friends From College,” “Master of None,” and “Making A Murderer.”

And for every one of those, there’ve been four or five I found unwatchable.

I haven’t seen anything that feels like it’s enriched my life in a way that’ll make me ever want to watch it all over again in two, five or certainly not 10 years. It all feels like a big time kill, like I went to the right hotel the wrong weekend for my high school reunion. Everyone was very nice, polite and pretty, but we had no shared past and no future.

Golden Age? Feels more like being mired in mediocrity.

As our options become more plentiful and our screens ever grander, the once communal act of watching great TV has become somehow smaller.

It’s why I think I felt such a primal urge to read when my poor wife was trying to explain how to navigate ever deeper into the swampy maze that is our TV viewing options.

I never feel diminished by time spent immersed in a book. Just the opposite. I often feel enhanced.

It’s a feeling I intend to cultivate. Because as TV becomes glitzier and more bewildering, books remain defiantly books.

And you never need worry about turning on a book.

The book turns you on.

The TV has become the penis

Outdoor TVs: Where the wildthings aren’t