The deadly echo of "Now is not the time" 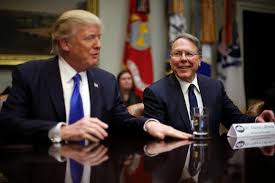 I’m growing nostalgic for the days when at least one hometown witness to slaughter would tell reporters, man, I never dreamed something like this could happen here.

We’re reaching a point where it’s happening every where, all the time to every one.

It’d be a dereliction of duty if every governor of every state didn’t have in his or her “A” file a written-in-advance statement mourning the loss of (pick one) 50/25/10 (pick one) worshippers/concert goers/grade schoolers ready to recite to the press.

Now is not the time.

Now is not the time.

More and more, “now is not the time” is sounding like a Satanic echo.

For God’s sake, when will the time come? How high does the stack of innocent bodies have to be for the alarm to sound?

We’re supposed to be reassured when Trump and the NRA point out (correctly) that the only thing that stops a bad man with a gun is a good man (or woman) with a gun.

True. Johnnie Langendorff is a hero. He ran to the sound of gunfire to eliminate a lethal threat.

So to those of you keeping score at home, the final is 1-26.

And now we’re hearing reports he may have eaten his final bullet so who knows how that effects the point spread.

I always like the part when law enforcers announce, hallelujah, this wasn’t terrorism, like we should feel relief it wasn’t ISIS, but just another angry white man with lots of grudges and guns.

Assuming he’s a Christian, it sounds like he’s putting more faith in Smith & Wesson than he is in Jesus.

I’d like to ask Paxton if he believes allowing North Korea and every other nation on earth easy access to nuclear weapons will make us all safer.

It’s an extension of the same logic.

I’m linking below some of the ideas I’ve put forth on reducing gun violence. Some are sensible, some are wacky, and some are merely provocative. At this point, I simply want to see something -- anything -- done that’ll budge us off our lethal dead lock.

I believe if we continue to do absolutely nothing, it’s a lock our futures are filled with more dead.

Trump says this isn’t a gun issue. He says it’s a mental health issue. And he’s half right — and, oh, how I wish he could be at least half right even just half the time..

It is a mental health issue.

By continuing to do nothing at all, we’re proving we’re all out of our minds.

Why’d they cancel the baseball games?

Solutions to gun violence: one bullet per gun