A Movember story of why I shaved my 'stache 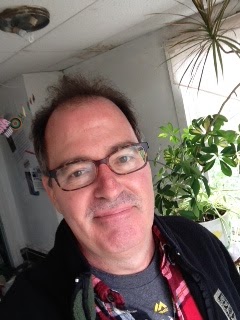 I foolishly thought I was years beyond altering my appearance to secure the love of a pretty girl.

And now if I happen to be standing at the bus stop next to anyone wearing an “I’M WITH STUPID” t-shirt, I’ll be without dispute.

What happened is as plain as what’s under the nose on my face.

Yes, I let a girl talk me into shaving my mustache because she swore it would make me appear more handsome.

Amazing I’d fall for that, right?

But this girl is just so beautiful. She’s sweet. She’s mischievous.

I believe it will solve a lot of the world’s problems if every little girl wakes up in the morning and goes to bed at night knowing she has her Daddy wrapped right around her little finger.

I think too many wonderful women lack confidence.

The other side of the gender coin is too many men have way too much confidence over meager achievement.

In fact, the essential inspiration for that wisdom is Val and myself. My wife is beautiful but thinks she isn’t.

Cappuccino-colored eyes, crooked grin, a manly scar or two. And for 34 years a devil-may-care mustache that reflected my personality; part go to hell, part heaven can wait.

I always had my mustache’s back — and I mean that in every sense.

But it was different when Lucy said she thought I’d look better without the ‘stache.

“Dad, I think you’ll look much more handsome without it,” she said. “You have such a nice face. You shouldn’t cover so much of it up.”

I spoil my daughters. Not with money, certainly, of which I have squat. No, I spoil them with affection and attention. Whether they one day lament my indulgences weren’t of a more material bent is a moot point.

I gives what I gots.

So, yeah, at her strategic and persistent urging, I shaved a part of my face I only previously shaved for driver’s license photo ID stunts.

I did it for her.

Shaving the upper lip felt strange, like taking off my pants in public. A decades-old mustache changes the structure of the face by diminishing the lip.

I knew Val would hate it, but with her encouragement I believed Lucy would love it.

So I was dumbfounded by the dismayed look on her face as she climbed off the school bus and saw my shiny new face.

“You look terrible!” she said.

But didn’t you say I’d be even more handsome?

Then she laughed, a cold, cunning laugh. I felt stupid.

Had I been played? Was she testing her skills at manipulating her old man? Had my appearance been a pawn in her game?

But this I do know: I’m going to think long and hard if a pretty little girl says I’ll look more handsome with a shaved head.

I shave my beard, Lucy lops her lochs