Who gets into heaven & will there be cavemen? 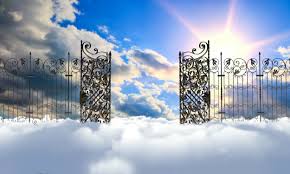 Population trend researchers estimate the next person born will be the 108,602,707,792 person to ever live on earth. Give or take a million or two.

The number seems small to me. I think there were at least that many in line in front of me at the post office the week before Christmas.

Those same researchers contend there are roughly 353,000 babies born each day, or more than double the average number of people who depart (156,000).

Given those projections, I figure we’re going to run out of convenient parking spaces by, oh, next Tuesday.

I’ve been delving into global population trends because I’m forever curious about the demographics of heaven and hell.

How many of those 108 billion or so souls have made it into heaven? Will affordable housing be as big a problem there as it is so many places here?

You have to think there’s going to be a lot of long lines, but if you’re there for eternity does it really matter? Assuming, that is, your DVR has enough free space.

Wikipedia, by the way, says actress Eartha Kitt died in 2008 at the age of 81 — and let’s for a moment acknowledge the brilliance of “Batman” producers for casting a actress named Kitt to play a character called Catwoman.

I wonder if there will be cavemen in heaven.

They had more on their walnut-sized minds than being good or bad. And I assume they were mostly good.

You can bet they didn’t post provocative political rants on Facebook or hog the passing lane — two benchmarks for me if I ever get to decide the eternal destination of souls other than mine.

Caveman heaven would, you’d think, be pretty low maintenance. Hell, give your common caveman four walls, a ceiling and basic cable — my first apartment — and right there you have caveman heaven.

I remember having a lot of caveman-like fun in my first apartment so I get it.

Heaven’s probably become more complicated in the last 50 years or so. We’re so much more materialistic than our humble ancestors.

The iPhone is maybe the most amazing invention in all human history and if we don’t get a new slightly-altered version of a one each and every year we feel under-privileged.

We live in an age where everyone expects Ruth’s Chris quality at Arby’s prices or else it’s a pissy, typo-riddled Yelp review posted before you stiff the poor waitress.

I’m lucky that I was born with the gift of appreciation. I swear I had a bunch of heavenly moments with family and friends over the holiday. Maybe I’m becoming less Grinchy.

Sometimes my idea of heaven is not having a Comcast bill for another 29 days.

So my heaven will be fewer earthly concerns, more readers, more time to golf and read and maybe time every once in a while to teach cavemen things like how to play ping pong or maybe Jenga.

The topic of heaven is endlessly fascinating.

What will you do if admission is so restrictive you get there and it’s just you, God, Jesus and, of course, Elvis.

I was friends with John Clouse, the 6-times married Evansville, Indiana, attorney and Battle of the Bulge veteran who was for years the Guinness Records most traveled man. In his remarkable life, he’d been to all but one of the world’s countries, islands and territories, having twice been thwarted from reaching Bouvet Island near the Antarctic because of weather that could be described as hellish.

I asked him before he died about 10 years ago to declare his wish for the ultimate destination.

I enjoy pondering the possibilities, which could be damning.

Really, we’d all be better off spending less time speculating about heaven and more time doing the soulful things that’ll one day ensure we’ll all one day get there together.

Hats in heaven: Another goodbye to another good friend

Email ThisBlogThis!Share to TwitterShare to FacebookShare to Pinterest
Labels: Eartha KItt, heaven, how old is earth, Who gets into heaven